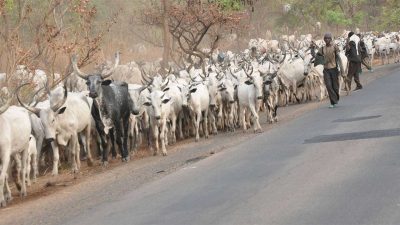 Many Fulani herdsmen storm Ogun for settlement and grazing

Over twenty Fulani herdsmen have arrived in Abeokuta, the capital of Ogun State claiming they are in the rocky city to “settle and graze”.

The Ogun State Police Command confirmed the herdsmen’s migration in a statement on Monday through its spokesman, Abimbola Oyeyemi.

Oyeyemi stated that “the herdsmen have been profiled and that though anyone was free to reside in any part of the country, the condition under which the herdsmen came into the city called for caution.”

Oyeyemi also advised members of the public to go about their businesses without any fear.

Here is the full statement: “The attention of Ogun State Police Command has been drawn to a social media report that some group of people suspected to be Fulani herdsmen came into Opeji area of Abeokuta in two trucks and the Command wish to clarify the issue as follows:

That on Monday 22nd of January 2018, we received an intelligence report about the arrival of a group of people numbering about twenty who are suspected to be Fulani herdsmen into Opeji area and their mission in the area is highly suspicious.