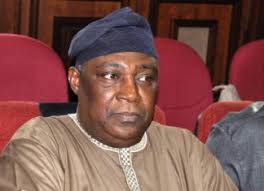 Mr. Madaki, an operative of the EFCC had earlier narrated how his team of investigators discovered millions of naira diverted by Mr. Badeh from Nigeria Air Force’s accounts through companies supposedly owned by members of his family.

At the sitting on Tuesday, Mr. Madaki, while responding to questions by Mr. Badeh’s counsel, Akin Olujimi, told the court that the Zenith Bank account allegedly used to launder the funds had ‘Mary Badeh’, the first defendant’s wife, as its sole signatory.

Referring to Exhibits H1 to H47, Mr. Madaki stated that, “Mary Badeh became the sole signatory to the account of Iyalikam Nigeria Limited in a letter signed by one Salamah Badeh, dated June 23, 2004 but acknowledged on March 21, 2016.”

In yet another revelation, Mr. Madaki said, “The directors of Prince and Princess Multiservices Ltd (another company through which NAF funds were allegedly laundered) as indicated in the Certificate of Incorporation, as at August 22, 2007, are the first defendant and members of his family. The sole signatory to the bank account for this company is the first defendant’s wife, Mary Badeh”.

On the observation by Mr. Olujimi that statements of the account of the first defendant from 2007 to 2011 were withheld by the EFCC and not included in the proof of evidence presented before the court, Mr. Madaki said:

“The first defendant still has a case to answer involving the Nigerian Maritime Administration and Safety Agency, NIMASA. I requested from our Lagos office the statements of accounts that were relevant to the case being investigated. The statements generated from November 2012 to 2015 were the ones relevant to the case at the time of investigation.”

In the absence of further questions for the PW19 whose cross-examination started about six months ago, O. A. Atolagbe, counsel to EFCC, applied for adjournment.

According to Mr. Atolagbe, the adjournment was to enable him review evidence of the witness under cross-examination to see if there is a need to re-examine him.

Justice Abang adjourned to February 26, 28 and March 1, 2018 for possible re-examination of the witness and continuation of trial.

Mr. Badeh is being prosecuted alongside Iyalikam Nigeria Limited, by the EFCC for allegedly using Nigeria Air Force, NAF, funds for personal enrichment and the acquisition of choice properties in Abuja.