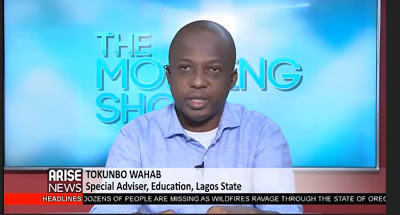 As Lagos State government counts down to schools re-opening, Special Adviser on Education, Barr. Tokunbo Wahab, has stated that compliance with COVID-19 safety rules is a vital prerequisite.

Wahab made this known when he appeared on The Morning Show, a webinar hosted by Arise TV while discussing the topic, “The New Norm In Education And LASG Online Teaching Aids For Out-Of-School Students.”

Recall that due to the novel coronavirus pandemic, schools in Lagos have been shut down for the past four months.

The Special Adviser said that no student will be allowed into classrooms without the school administrators ensuring adequate safety measures.

“Students will not be allowed into the classrooms if they do not comply with COVID-19 preventive measures,” he said.

Tokunbo Wahab further revealed that reopening of schools will be in phases.

“On the 14th of September, Lagos State-owned tertiary institutions will reopen for the first time after six months of closure.

“We are going to start with final year students across our tertiary institutions. Then after their exams, those in their penultimate year can resume,” Wahab said.

When asked about Lagos State government’s preparedness for resumptions in the tertiary institutions, Wahab said the government ably led by the governor of Lagos State and Incident Commander of COVID-19 Lagos, Babajide Sanwo-Olu, is well prepared as every necessary preventive has been put in place to have the students back in school to continue their learning.

He also stated that going forward, the lessons learnt through the advent of the pandemic are not going to be ignored, even though he believed Lagos State government scored the highest marks in managing the pandemic.

Barr. Wahab was of the opinion that not only is the government prepared for school re-opening in Lagos, the teachers are too especially when the governor ensured that the salaries were not owed during the lockdown.