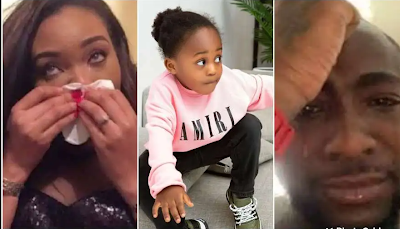 The death of the three-year-old child has some celebrities and fans in mourning.

According to multiple reports, Ifeanyi who celebrated his third birthday recently reportedly drowned in his father’s Banana Island home swimming pool and was rushed to Lagoon Hospital on Bourdillon road, Ikoyi, Lagos where he passed on, Monday night.

It was also said that young Ifeanyi drowned in the family pool and was underwater for a while before he was discovered and rushed to the hospital.

Makun wrote in the post, “The death of a child is unnatural, unfair and tragic. This hits me so bad.”

Daddy Freeze, who went live on Instagram in the early hours of Tuesday morning said, “When the person you love is someone involved it becomes a heavy emotional burden. I am not confirming anything but bear with me I will not be live tonight.”

Lasisi Elenu also posted, “Father heal your children’s heart from this pain, strengthen them in such a dark and hurtful time oh Lord.”

Reality TV star and actress, Rosemary Afuwape, said on her Instagram story, “My heart can’t take this. This is so painfully unbearable. Chioma and Davido please accept my condolences. No amount of words can comfort your hearts. I am truly sorry for your loss.”

Also, while some Twitter users have expressed their condolences, others hang on to hope that the news becomes false.

A tweep, Peace Agina, expressed her pain saying, “The demise of Davido and Chioma’s son is heartbreaking. No parent should lose their child. This is really sad. I pray God comforts them.”

Another tweep, Mr. Walter said, “The death of a child remains mysterious, unjust & questionable to his/her creator. My condolences to Davido, his fiancée, Chioma. May God grant them the fortitude to bear this loss. The global entertainment industry is traumatised by this sad occurrence.”

A tweep, Mr Sam, shared his faith that Ifeanyi is still alive and said, “Till Davido tweets about it, Ifeanyichukwu lives. I want all parents to join me & say! no matter how old I am, I shall never witness the death of my children. Amen.”

As of 1.28am, news of Ifeanyi’s rumored death was the most trending topic on Twitter.

It was also learnt that his father (Davido) had been teaching him how to take dips in the pool in an attempt to create a father-and-son bond.

The music star was seen in videos trending on social media teaching his son how to swim.

In one of the videos, Davido was seen inside the big pool in his mansion with Ifeanyi.

He carried the three-year-old boy and made him flap his legs in the water while he gave him instructions on what to do.

The singer later carried his son around in the pool as the boy continued to flap his legs.

Davido and his partner, Chioma celebrated the boy’s third birthday in a grand style a couple of days ago.