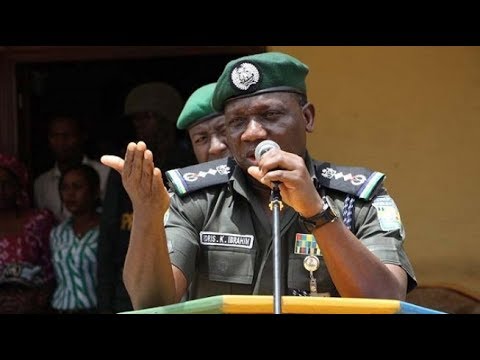 Reports making the rounds indicate the Kano State Police Command has invited Liberty Television reporter who posted the rave making video of the speech made by the Inspector General of Police, Ibrahim Idris.

According to The Punch NG, the journalist, Aminu Nurudeen, who is believed to have posted the viral video showing the Inspector General of Police, Ibrahim Idris, struggling to read a speech at a public event in Kano, has gone into hiding.

Reports stated that the Kano State Police Command invited the reporter to its office immediately after the video went viral.

The video shows the IG struggling to read his speech at the inauguration of the Police Technical Intelligence Unit in Kano, Kano State on Monday.

It was gathered that authorities are upset with the journalist because he had allegedly disobeyed a directive by the Kano State Police Command to journalists present at the event not to report the IG’s blunder or make the video public.

The viral video showed the IG delivering an incoherent speech, which had since exposed him to public ridicule.

Voice of Liberty had posted the video on Wednesday. It was gathered on Friday that the IG was embarrassed by the trending video and had ordered an investigation into its release.

In a chat with Punch, a source said, “He (the IGP) has however ordered an investigation into the leakage of the video but we are watching to see how he intends to deal with the individuals behind the viral video without further embarrassing himself and the force”.

Also, detectives are allegedly using the police technical platform to track the original source of the video on social media.

Bloggers that posted the video might be interrogated by the police for allegedly, “peddling a doctored video meant to cast the IG in bad light and embarrass the police leadership.”

Idris, in an interactive media chat on the police Twitter handle, Nigerian Police @PoliceNG #Askthepolice, had also told Nigerians that the video was doctored.

“Yes, it was doctored,” he said in response to a question from a Twitter user.