HomeNewsTrending Video: Atiku lands in US 13 years after- Saraki, Secondus, others...
FeaturedNews

Trending Video: Atiku lands in US 13 years after- Saraki, Secondus, others make the trip 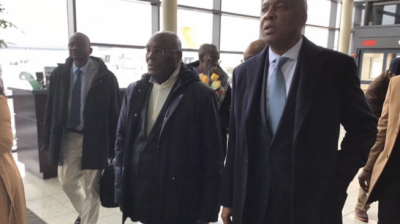 The presidential candidate of the Peoples Democratic Party (PDP), Atiku Abubakar, is currently in the United States.

The last time he visited the country was in 2005 when he was the vice-president of Nigeria.

He allegedly stayed away from the U.S after the authorities began investigating a bribery scandal involving William Jefferson, former American congressman.

The PDP candidate was accused of demanding a bribe of $500,000 to facilitate the award of contracts to two American telecommunication firms in Nigeria, an allegation he denied.

Leadership of the ruling party, the All Progressives Congress (APC) had taunted him for staying away from the US but all that is now over.

Atiku was on Thursday accompanied by Senate President Bukola Saraki who is the director-general of his campaign;  Uche Secondus, national chairman of the PDP and some key members of the opposition party to the United States.