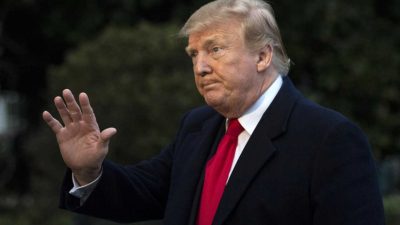 US President Donald Trump declared Sunday that he had been completely exonerated after his campaign was cleared of colluding with Russia in the 2016 election, in a major boost for his re-election hopes.

The long-awaited final report of Special Counsel Robert Mueller’s probe into Moscow’s election meddling concluded that no member or associate of the campaign conspired or coordinated with Russia in its plot to boost Trump in the vote more than two years ago.

While not completely absolving the president, Attorney General Bill Barr’s letter to Congress summarizing the still-secret Mueller report cleared a dark cloud that had hung over the Trump’s legitimacy since he took office in January 2017.

“There was no collusion with Russia. There was no obstruction. It was a complete and total exoneration,” Trump said of Mueller’s conclusions.

“It’s a shame that the country had to go through this,” he added. “This was an illegal takedown that failed.”

Deputy press secretary Hogan Gidley said Trump was “in a really good mood” and “very happy with how it all turned out.”

Gidley said the president watched television, talked to staff and made calls during his flight home from Florida.

He also said there were no new surprises coming from the Mueller team, which is disbanding — no further indictments being referred, and no sealed indictments outstanding.

On the other hand, according to Barr’s letter, Mueller clearly had some evidence to support an obstruction case, but was uncertain whether it was enough to support criminal charges.

“While this report does not conclude that the president committed a crime, it also does not exonerate him,” Barr cited Mueller as saying.

Democrats in Congress are now certain to demand Mueller’s underlying evidence and push to investigate further.

“It is unacceptable that, after Special Counsel Mueller spent 22 months meticulously uncovering this evidence, Attorney General Barr made a decision not to charge the President in under 48 hours,” the Democratic chairs of the House Judiciary, Intelligence and Oversight committees said in a joint statement.

“His unsolicited, open memorandum to the Department of Justice, suggesting that the obstruction investigation was ‘fatally misconceived,’ calls into question his objectivity on this point in particular.”

Door opened for strong 2020 bid
A major barrier for Trump’s re-election in 2020 lifted just as a strong field of potential Democratic candidates was forming to select who would take him on.

Trump for two years has labeled the investigation a “witch hunt,” even as Mueller’s team issued charges ranging from conspiracy to lying to investigators against 34 individuals.

Six of those were former insiders in Trump’s circle, and five have been convicted, including Trump’s former personal attorney Michael Cohen, his national security advisor Michael Flynn and his campaign chairman Paul Manafort.

Cohen was sentenced to three years in prison for crimes including, at Trump’s alleged instruction, using campaign funds for hush payments to an adult film star who allegedly had an affair with Trump.

And Manafort was imprisoned for 7.5 years, though mostly for crimes unrelated to the campaign.

The unending probe saw Trump frequently angrily attacking Mueller — one of the most respected members of Washington’s judicial and prosecutorial elite — and at times appeared to throw his policy momentum off course.

For months, the White House worried that Mueller was honing in on Trump’s family, including son Don Jr and son-in-law Jared Kushner, as well as the president himself.

And it also left questions in the minds of many of Trump’s supporters, who will now likely unite around his declaration of “complete exoneration.”

Investigations move to Congress
But the end of Mueller’s operation did not leave Trump’s White House in the clear.

Democrats in Congress are already conducting some 17 investigations of the administration, spreading their net far more broadly than Mueller’s relatively narrow mandate.

They want the full Mueller report and they are demanding the underlying evidence supporting his conclusions.

“The fact that Special Counsel Mueller’s report does not exonerate the president on a charge as serious as obstruction of justice demonstrates how urgent it is that the full report and underlying documentation be made public without any further delay,” they said.

Read also US on edge for Russia probe findings on Trump

Democrat Jerry Nadler, chairman of the House Judiciary Committee, announced that he would be calling Barr to testify in the near future ” for the American people to know all the facts.”

newsheadline247 - January 26, 2023
“Most of the banks don’t just have the newly designed currency as the available quantity for distribution is being warehoused on the instruction of...
Politics

2023: Tinubu in Ogun, promises to end incessant strikes in tertiary...

Lukman Omikunle - January 25, 2023
The presidential candidate of the All Progressives Congress, Senator Bola Ahmed Tinubu, has disclosed that if elected into office in February, his administration would...