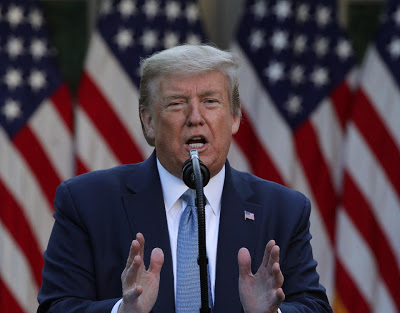 Trump justified his surprise rant about appointing judges by saying such people were needed now more than ever.

President Trump spent part of his daily White House briefing on the COVID-19 coronavirus pandemic accusing Democrats of blocking his judge appointments and threatened to adjourn both houses of Congress to make recess appointments, referring to an executive power that does not grant him authority as broadly as he claims, according to a constitutional law expert.

Congress is currently in recess until May 4 but is still operating pro forma sessions where any lawmaker can object to a motion, something that prevents the president from pushing through vacancy appointments and something Trump derided as “phony.”

Pro forma sessions became a practice employed by Democrats under President George W. Bush, but after President Barack Obama tried to push through three appointments in 2012, Republicans filed a lawsuit and the Supreme Court ruled against the president in 2014, saying the president could only make such appointments during lengthy recesses.

Trump said the Senate—which is controlled by Republicans—should fulfill its duty of voting on nominees, “or it should formally adjourn so that I can make recess appointments…If the House will not agree to that adjournment I will exercise my Constitutional authority to adjourn both chambers of Congress.”

Article 2, Section 3 of the Constitution does give the president some power to adjourn Congress, but under specific circumstances: “he may, on extraordinary Occasions, convene both Houses, or either of them, and in Case of Disagreement between them, with Respect to the Time of Adjournment, he may adjourn them to such Time as he shall think proper.”

The House and Senate already have a date set for January 3, 2021 for their formal adjournment, and while the Senate could try to change that, as explained by Steve Vladeck, a law professor at the University of Texas at Austin, that would likely require getting rid of cloture, a motion to end debate.

Despite Wednesday’s screed, Trump has appointed what the White House deemed a “historical number of federal judges” by November 2019, with 193 total judges confirmed so far including one in four judges on the courts of appeals.

Trump during Wednesday’s briefing on what such a move would mean: “We’ll probably be challenged in court.”

In the 2014 Supreme Court ruling, four of the conservative justices were in favor of even more stringent limits on the president’s ability to make appointments during extended recesses. Justice Anthony Scalia wrote that the purpose of these recess appointments “were only meant to be used to fill vacancies that just open up between two formal sessions of Congress.”

Trump justified his surprise rant about appointing judges by saying such people were needed now more than ever. Trump’s assertion that such blocking of judges has “never ever happened before” didn’t go unnoticed as Merrick Garland’s name began trending on Twitter after the briefing. The GOP infamously refused to hold a hearing or vote on Obama’s Supreme Court nominee throughout 2016. Trump has recently been attempting to pull focus away from the administration’s delayed response to the coronavirus, with recent reports charging the president with ignoring warnings of a pandemic in January and pleas for social distancing in February. Yesterday, he announced he’d be pausing funding in the World Health Organization, accusing the organization for many of the things critics are accusing Trump and his administration of having done.

636,350. That’s how many cases of the coronavirus are confirmed in the U.S., the most of all countries and about a third of worldwide cases. The country also leads the number of reported deaths with 28,364.