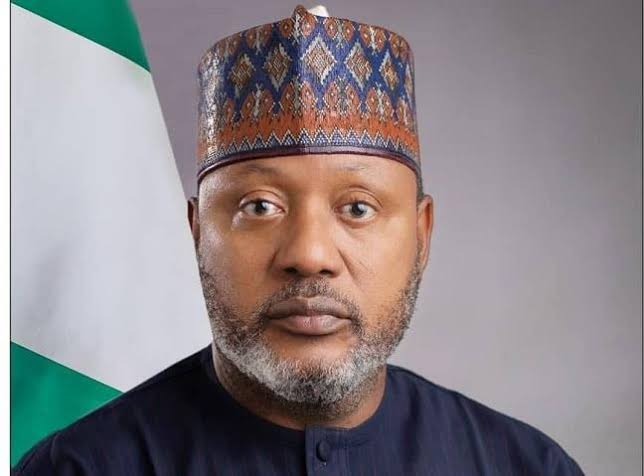 The Minister of Environment, Mohamed Abdullahi, may have cost Nigeria to lose upto $10bn commitments to fund its Energy Transition Plan (ETP) because he was preoccupied with promoting his close family member, Dahiru Salisu, who is under investigation for N6.5 billion fraud, for the position of the Director General of the National Climate Change Council (NCCC).

Dahiru is being investigated by the ICPC for the fraud he committed during his tenure as a Director in the Ministry of Environment. In fact, it was alleged that he hurriedly retired from the service instead of pushing for the position of Permanent Secretary when his atrocities were exposed.

Dahiru styled as DG NCCC accompanied the Minister, who led the Nigerian delegation to the recently concluded 27th Conference of Parties (COP27) Climate Change meeting in Egypt. His mission at COP27 was to seal the deal and get initial financial commitments from the world’s financial powers on Nigeria’s ETP that was launched by the Vice President Yemi Osinbajo in August 2022. It was launched with widespread support from global figures such as billionaire philanthropist Mike Bloomberg and Her Excellency Amina Mohammed, Deputy Secretary General of the United Nations.

The Vice President and Mr. President’s efforts from COP26 and the passing of the Climate Change Act 2021 had already yielded results with financing commitments worth $3.6 billion from the World Bank and African Development Bank. So the bar was even lower than $10 billion.

How much did the Minister get Nigeria at COP27?

Who knows? But it was not more than the $3.6 billion already pledged. The Honourable Minister was more preoccupied with promoting his family member as Director General of the NCCC international delegations neglecting his role of brokering deals for Nigeria with strategic partners identified in the ETP. This bungled opportunity left some members of the delegation gnashing their teeth in disappointment.

This was made worse by the realisation that South Africa who were promised US$8.7bn after COP26 without an ETP, now reported that they had developed a strategic plan which has given them access to these funds.

“And don’t forget that our country did its ETP well before South Africa and here we are, the country getting its US$8.7bn deal approved and Nigeria failed with its own deal,” a member of the delegation lamented to this medium.

How did we get to this sorry state?

“The Minister wanted to bring the Nigeria Climate Change Council firmly under his Ministry’s control. Further, he wanted to make his cousin the Director General of the NCCC. This defeats the purpose of the council that is supposed to cut through government red-tape and cut across the entire government,” Ministry officials told this medium on Friday, 18 November, 2022.

They continued, “It betrays the intent behind the Climate Change Act 2021, which is that Climate Change is the primary responsibility of every one and every ministry and should not be pigeon-holed in a single ministry.”

In short at COP27, the Minister’s cronyism and ineptitude was on display. He was simply unable to UNDERSTAND and NEGOTIATE Climate Finance.

“The Minister and the Ministry cannot manage the transactional issues associated with energy transition particularly related to hydrocarbons such as petroleum, power, especially finance. The Minister just couldn’t understand how to negotiate on any of these and the result was there for us to see. We lost out on any additional funding for the US$10bn deal,” another member of the delegation told our correspondent.

Prior to the COP27, the Minister had tried to install his cousin, a former Director in the Ministry of Environment, Salisu Dahiru, as the DG of the NCCC. First he tried through a presidential approval without prior recommendation from the NCCC as required by the law. Then, in a hastily arranged and unadvertised inauguration of the NCCC, the statement of his relative’s appointment referred back to the original approval without reference to whether the council actually met to recommend him. The opaqueness and urgency with which the appointment was spirited through raised questions as to whether Mr Dahiru was hiding something.

As it turned out, Mr Dahiru was in fact hiding something. He is currently under investigation for over N6.5billion fraud and may be a cause of concern to security agencies charged with conducting due diligence on nominees. The Minister, in disregarding both protocol and law, was obsessed with making sure Dahiru operated from the Ministry of Environment styled as Director General, National Climate Change Council and accompanied him to COP27.

“The international community and foreign partners are apparently not happy with the choice of Dahiru as DG,” A person familiar with donor community thinking, who is not authorised to speak publicly, noted. The same commentator continued, “They are also aware of the controversies surrounding the appointment and the appointee.” It could be among the reasons financiers are reluctant to put more money into the ETP.

“The international community and foreign partners in charge of funds are aware that both the Minister and his cousin see climate change purely through an environmental lens and are unable to appreciate the strategic importance of Climate Change in governance and society,” a source attending the COP27 said.

“They see Dahiru as a stooge. They don’t see him as dynamic. Of course everybody that has to do with Climate Change Council knows that the NCCC DG should be an independent Climate tzar, a CEO.” The same source added. “Dahiru does not demonstrate the independence required to break free from the control of the Federal Ministry of Environment and the Minister of Environment.” an environmental professional who works with international development partners such as the United Nations said.

“What happens when the Minister’s tenure as Minister ends? Who wants to put their money under these conditions? The funding partners know all these hence they are reluctant to put in their money,” the same professional asked in frustration.

This medium learnt further that an international partner with funds intended for Nigeria has already diverted funds originally earmarked for Nigeria to other countries in Asia and other parts of Africa.

“The international donors don’t have confidence in the Federal Ministry of Environment. They are thus, waiting for a new government to come in and do the right thing,” another source in the development sector informed our correspondent.

“One of the saddest events of the COP27 was that despite Nigeria having a pavilion right opposite that of one of the climate financiers identified in Nigeria’s Energy Transition Plan at the Conference,” a member of Nigeria’s delegation at COP27 observed, continuing that “the so-called DG did not bother to cross over and introduce himself. It was insensitive and bordered on diplomatic incompetence”.

“The Minister’s loyalty to his family is literally hindering Nigeria’s opportunities at accessing billions of dollars in international donor funds, This is most unfortunate,” Karim Garba, a renewable energy start-up manager familiar with Climate Finance opined.

A retired foreign service official involved in Climate Change negotiations on behalf of Nigeria in various COPs including the Paris Agreement COP in France added, “the message is clear, we cannot be treating Climate Change issue as if it is a ministry issue let alone a family affair. It won’t help us secure international funds”.

This source, who continues to be consulted on climate diplomacy noted that, “other countries who have taken the issue of climate change as cutting across the entire government include the United States of America where there is a cabinet level Climate Change Tzar, John Kerry who sits in the US equivalent of the Federal Executive Committee dealing only with Climate Change.”

He continued further that, “the recently passed Inflation Reduction Act by the US Congress includes a $370 billion investment in transitioning the US economy to a low carbon economy. In South Africa there is a Presidential Climate Finance Task Force inside the Presidency. They’ve secured over US$8.7billion in funding for climate transition. We had the Energy Transition Plan for this. The Ministry of Environment hijacked it and now instead of leading Africa and setting the pace on the issue, we are followers”.

READ 2023: I won’t run my administration on religious bias, Tinubu assures CAN

Garba continue, “If what the world sees resembles an ‘organised criminal enterprise” comprising a minister, a close family relative under investigation for fraud, they are unlikely to part with their money, even if it is for a worthy cause.” He concludes “Its not as if Nigeria doesn’t have examples of professionals with both political, diplomatic and managerial skills who earned the trust of internaitonal finacniers and were successful in persuading international financiers to fund and finance Nigeria”.

Nigerians such as Ngozi-Okonjo Iweala, Amina Mohamed, Akinwunmi Adeshina and Nasir El Rufai earned the trust of international financiers by virtue of their intellect, innovativeness, independence and competence. El-Rufai in particular was a quantity-surveyor with little expertise in privatisation and commercialisation when he took over the Bureau of Public Enterprises. But the management and leadership qualities he displayed earned him the respect of donors and earned Nigeria the funding and support to implement the programme. The qualities required mean that such a person in charge of such a critically sensitive position on Climate Change cannot be tainted by corruption allegations, scandal or appear to be in the position by virtue of their family connections or even beholden to any ministry. We do Nigeria a great disservice when we present such morally and managerially compromised persons to the world.