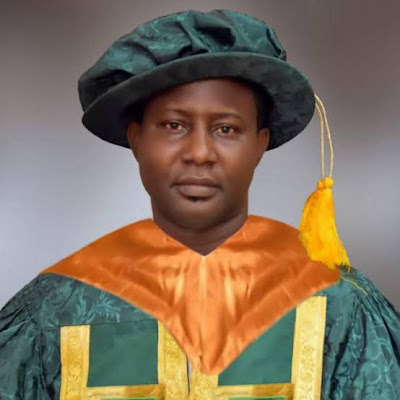 Abdulrazaq, in a statement by his Chief Press Secretary, Rafiu Ajakaye, on Sunday night, mourned the late KWASU VC, it read in part, “Kwara State Governor, AbdulRahman AbdulRazaq has described as painful and shocking the death of the Vice Chancellor of Kwara State University (KWASU) Prof. Muhammed Mustapha Akanbi, SAN.

“We submit to the decree of Allah who gives and takes. It is against that backdrop that we mourn the Vice Chancellor who answered Allah’s call tonight. He was a true and humble servant of Allah and we beseech our God, the Oft-Forgiving and Merciful, to grant him al-jannah Firdaus,” the Governor said.

“The professor of law was a colossus who played the leading role to open a new chapter of academic excellence and greatness for KWASU. Our condolences go to his family, immediate and extended, to KWASU and the rest of the academic community, and to members of the bar and the bench in Kwara State and across the country,” the statement added.

The Emir of Ilorin and Kwara State Council of Chiefs, Mai-Martaba Alhaji Ibrahim Sulu-Gambari CFR, has also expressed sadness over the demise of the Vice Chancellor of the Kwara State University, (KWASU) Malete, Professor Muhammed Akanbi SAN, who died on Sunday.

Alhaji Sulu-Gambari described the incidence as quite shocking, unfortunate and saddening stressing that the VC’s death is a colossal loss to the people of Ilorin Emirate, Kwarans and humanity at large.

In his condolence message issued by his spokesman, Mallam Abdulazeez Arowona, the Emir said: Inna lillahi Waina Ilaihi Rojihhun. I received the news of the death of Professor Muhammed Akanbi SAN with sadness.

According to him, “He was a replica of his late father and pioneer chairman of the Independent Corrupt Practices and Other Related Offences Commission, (ICPC) Justice Mustapha Akanbi (rtd) who was until his death the Wakilin Ilorin Emirate.

“He attained the pinnacle of his legal career to become a Senior Advocate of Nigeria, (SAN) as well as the Zenith of academic profession as a Professor of Law and was appointed by the current administration as the 2nd Vice Chancellor of the Kwara State University, Malete all within his youthful age of existence on earth.

“He demonstrated high level of incorruptibility, hardwork, commitments and dedication to the service of God and humanity at all levels of his private and public engagements. His death is a rude shock and devastating because of what he stood for in the society as a promising young man whose service, wisdom and commitments is needed for the growth and development of our dear nation.”

Alhaji Sulu-Gambari however extended the condolence of the entire members of the Kwara State Traditional Rulers Council to the government and people of Kwara State, especially, Governor AbdulRahman AbdulRazaq, the Governing Council, Management and Students of the University, the people of Ilorin Emirate and beyond over the irreparable loss.

While commiserating with the deceased’s families both immediate and exdended, the Emir prayed Almighty Allah to forgive his shortcomings, accept his good deeds and admit him into al-janatul firdaos.

The late Vice Chancellor will be buried today, Monday, November 21, 2022 in his country home according to Islamic rites, it was gathered.

Akanbi until his death was a celebrated academic, law teacher and legal icon that has achieved so many feats at his young age, and was very passionate about academic excellence and community development.

Akanbi joined the services of the University of Ilorin in 1998 as Lecturer II and was appointed Professor of Law in the Department of Business Law in 2012.

An alumnus of the prestigious Kings College, University of London, United Kingdom, Akanbi served as legal assistant in the legal unit of the Central Bank of Nigeria, Lagos State, during his national service year.

He boasted of over twenty years’ experience as an academic in the University of Ilorin, during which he also held several administrative positions.

Akanbi had over 60 national and international publications in reputable peer-review journals with a bias in Alternative Dispute Resolution and Arbitration Law. His other research areas include conflict resolution laws, corporate management law and practice.

The university don was a member of the Technical Working Committee 2013 on “An Independent Review of Evidence of Gross Violation of the Rights to Participation in Government and Fair Trial through the Election Petition Process in Nigeria 2003 – 2011,” commissioned by National Human Right Commission, Abuja, OSIWA and the Ford Foundation.

He was also a Consultant/Member of the Technical Working Committee 2012, on a research on the Legal framework on Citizenship and Religion as it affects National Integration in Nigeria’ commissioned by International Development Law Organisation, Rome, Italy.

He also served as Chairman of the Nigerian Bar Association, Ilorin Branch between 2007 and 2009.