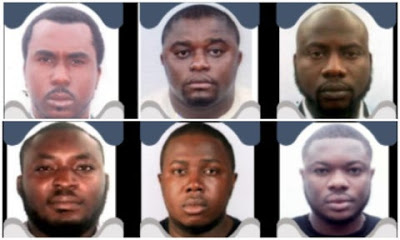 The United States has exposed six Nigerians over alleged internet fraud worth over six million US dollars.

In a statement on its website on Tuesday, the US Department of State said the six persons “manipulated their victims to gain access to their sensitive information and financial resources”.

It explained further that they targeted American businesses and individuals using “business email compromise and romance fraud” while impersonating American business executives, requesting, and receiving wire transfers from their accounts.

The statement added that they targeted women, especially those who just lost a spouse, deceiving them with affection through calls and constant chats until they gain their trust and swindle their unsuspecting victims.

US Department of Justice pronounced that “all property and interests in property of the designated persons that are in the possession or control of US persons or within or transiting the United States are blocked, and U.S. persons generally are prohibited from dealing with them”.

US Secretary of State, Mike Pompeo, warned, “The U.S. will not tolerate such gross misuse of technology. The United States will use all of the tools at our disposal to defend the American people and businesses from malign actors that seek to target them, including cyber-enabled actors who prey on vulnerable Americans and businesses.”

According to the US Department of Treasury Office, Uzoh was designated pursuant to E.O. 13694, as amended, for having engaged in fraudulent cyber-enabled activities.

From at least early 2015 to September 2016, Uzuh and an accomplice sent emails to victims appearing as though they were coming from a company’s true business executive and would request and receive wire transfers of funds from the businesses’ accounts. Uzuh would often target over 100 businesses in a single day. A loss in excess of $6,300,000 can be attributed to a scheme led by Uzuh and an accomplice.

Olorunyomi was designated pursuant to E.O. 13694, as amended, for having engaged in scandalous cyber-enabled activities.

From September 2015 to June 2017, Olorunyomi and an accomplice led a scheme that victimized Americans through the use of romance fraud. Olorunyomi and his co-conspirators created fictitious profiles on dating websites and posed as individuals looking for love. He developed online relationships with victims to either obtain funds directly from victims, or used their bank accounts to funnel fraudulently obtained money. Losses exceeding $1,000,000 can be attributed to the romance fraud scheme led by Olorunyomi and his accomplice.

Ogunshakin was designated pursuant to E.O. 13694, as amended, for having provided financial, material, and technological support for Uzuh.

Ogunshakin conducted business email compromise and romance scams and provided Uzuh and other co-conspirators with bank accounts that were used to receive fraudulent wire transfers. Additionally, Ogunshakin assisted Uzuh with contacting victim companies and he conducted his own BEC schemes.

Okpoh was designated pursuant to E.O. 13694, as amended, for having provided financial, material, and technological support to Uzuh. Okpoh provided hundreds of U.S. bank accounts that were used to receive fraudulent wire transfers from victims of BEC and romance fraud.

Benson was designated pursuant to E.O. 13694, as amended, for having provided financial, material, and technological support to Uzuh.

Kayode was designated pursuant to E.O. 13694, as amended, for having provided financial, material, and technological support to Uzuh.