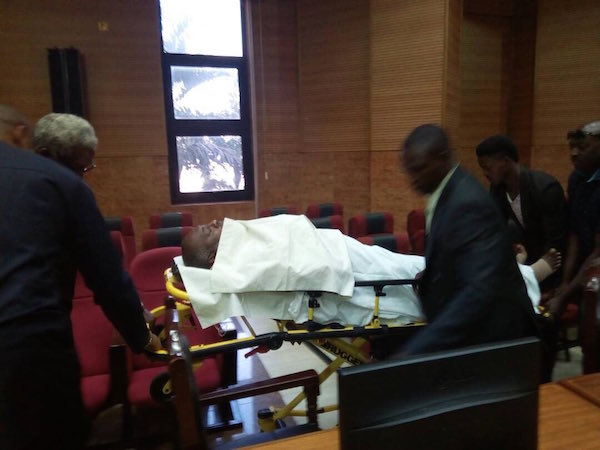 A Federal High Court in Abuja has ordered that the ongoing trial of former national publicity secretary of Peoples Democratic Party (PDP), Olisa Metuh will be conducted in his absence.

Metuh’s counsel, Emeka Etiaba, (SAN) had filed an application that the matter be adjourned to allow Metuh recuperate.

But The trial judge, Okon Abang gave an order on Wednesday that Metuh’s trial will continue in absentia.

On Tuesday, Sylvanus Tahir, the prosecutor, following Metuh’s absence in court and in spite of Etiaba’s application for an adjournment, prayed the court to proceed with the matter.

Tahir told the court that although the law said defendants in criminal matters must be present in court, there was an exception to the rule where misconduct was established.

The prosecutor maintained that the circumstances that led to Metuh’s fall on May 21, resulting in his absence in court were a clear disregard for the orders of the court and constituted misconduct.

Abang in his ruling said he agreed with the submission of the prosecution that Metuh willfully disobeyed court directives.

“I entirely agree with the submission of Tahir that what transpired in the courtroom amounts to misconduct by willfully failing to abide by the directives of the court to remain on his seat,” he said.

“The court had directed the defendant to remain on his seat because, in my view, he wanted to give the impression that he could not walk properly since he was using a walking aid.

“The defendant ignored the directive of the court and headed for the dock when he fell which made the court to adjourn for 29 minutes.

“When the court reconvened, I saw the court’s doctor, Adaora Ikezor in the courtroom, she approached the bench and told the court that the defendant needed to be taken to the hospital.

“I notice that the defendant was on the floor and the people around him did not make an attempt to lift him up.”

According to Abang, Metuh was whispering loudly and groaning intermittently, giving the impression that he was in pain, making the temple of justice appear like an accident scene.

The judge added that the doctor had no business being in court since he was not sure under whose authority she came to the court saying it was not under the court’s directives.

“In a normal situation, if there is an emergency in the courtroom, anybody can call a medical doctor to attend to the situation,” he said.

“But where the issue involves a defendant in a criminal trial, and the proceedings are ongoing, not adjourned, a medical doctor cannot attend to the defendant that purportedly needs medical attention without the permission of the court.

“This is because looking at the checkered history of this case, the court doctor cannot just on her own decision to attend to the defendant without the knowledge and permission of the court.”

He added that since there was no material placed by the defendant in court explaining his condition, it could not be presumed the court was aware of the state or condition he was in.

The judge held that Metuh had jumped bail by failing to attend court on May 22 without any reasonable explanation for his absence.

He said under section 266(a) of the administration of criminal justice act, the court was entitled to proceed with the trial of the case in the absence of the defendant.

He judge opined that if Metuh did not intend to frustrate the trial, why had he not appealed the three previous ruling of the court that refused to order the release of his international passport.

He adjourned the matter until May 24 for the continuation of trial in Metuh’s absence saying the former PDP spokesman would not be denied a fair trial.

Recall that Olisa Metuh had fallen in court during the trial on Monday morning. The matter was stood down by the presiding judge, Okon Abang for Mr Metuh to be attended to.