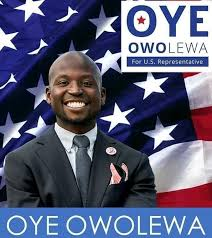 Nigerians in Diaspora Commission (NIDCOM), has congratulated the feat recorded by Oye Owolewa who emerged first Nigerian-US Congressman following his record victory in the US  elections 2020.

The Director-General, NIDCOM, Abike Dabiri-Erewa, in a letter of congratulations, stated that she was pleased with the wonderful feat of Owolewa, describing it as well deserved.

She acknowledged the sterling qualities of Owolewa as a role model to the youths and a good ambassador of Nigeria which endeared him to the grassroot leading to his historical election into the US Congress.

Dabiri-Erewa advised Owolewa to diligently carry out his duties as a new congressman in such a way as to positively impact on the community who entrusted him with their votes.

Despite the campaign being toilsome, Owolewa pulled through and won.

“This goes to show that with dedication, hardwork, resilience and prayer one can achieve just about anything”, Dabiri-Erewa said.