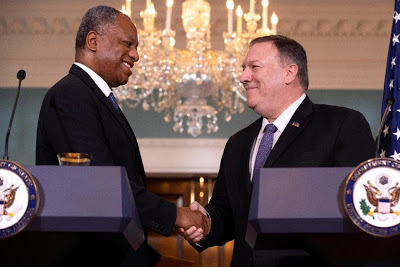 The United States and Nigeria voiced hope Tuesday that the Trump administration would soon lift onerous visa restrictions slapped on Africa’s most populous country, which said it was “blindsided” by its ally.

Secretary of State Mike Pompeo, meeting Onyeama, said that Trump took action partly due to the “terrorism threat” in West Africa, where Nigeria has fought alongside the United States against Islamist extremists.

Nigeria remains a “strategic partner” but Trump restricted visas as it has “room to grow in sharing important national security information.”

Striking a diplomatic tone, Onyeama said his talks were “very gratifying” but acknowledged, with a smile, that Trump’s move caught Nigeria off-guard.

“We were somewhat blindsided by the announcement of the visa restrictions,” Onyeama said.

He said that Nigeria had already been looking to address US concerns, such as providing information on suspected terrorists and embedding electronic data into passports.

“We know, and the US officials have also confirmed, that we have been able to tick most of those boxes,” he said.

The lingering problem, he said, involved how to handle lost and stolen Nigerian passports.

He said Nigeria was putting in place a system that would make data from such passports “immediately available” to all members of Interpol, the global law enforcement body.

“We hope to have that up and running very soon,” he said. “Hopefully, once that has been achieved, we look forward to being taken off this visa restriction list.”

Trump came to office vowing to impose border restrictions and notoriously was quoted as using a vulgar epithet for African and other developing nations that send immigrants to the United States.

Unlike a controversial order days after he took office that essentially banned entry to citizens from a number of Muslim-majority countries, the latest restrictions primarily involve foreigners who seek to immigrate rather than visit.

Along with Nigeria, Trump imposed the curbs on nationals from Eritrea, Kyrgyzstan, Myanmar, Sudan and Tanzania.