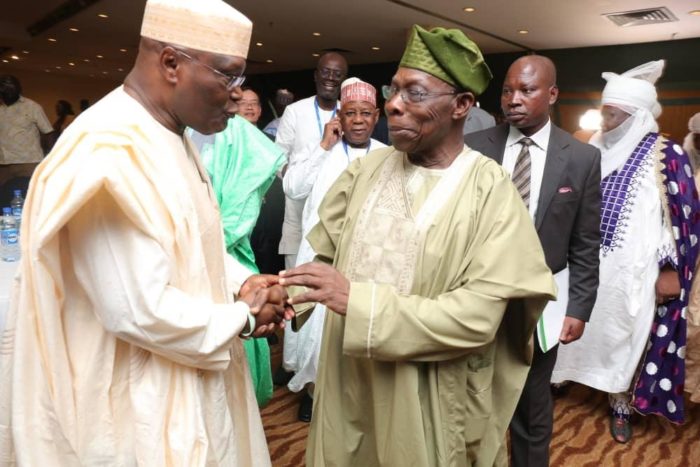 The ruling party descried Obasanjo’s intervention as his “legendary hypocrisy.”

Abubakar was in 2017 denied entry visa to the United States after his application.

It is said that the US has refused the former vice-president entry into its country because of a scandal.

In 2005, the FBI videotaped William Jefferson, a congressman representing Louisiana, receiving $100,000 in a leather briefcase as part payment of a $500,000 bribe allegedly demanded by the then vice-president to influence contracts for American companies.

Obasanjo and Abubakar reconciled their differences on Thursday in Ogun state after the latter ’s famous visit to the former president..

In a statement on Friday, Yekini Nabena, acting spokesman of APC, said Obasanjo’s intervention is evidence of his “legendary hypocrisy”.

“We have come across credible reports that former President Olusegun Obasanjo has made moves to secure United States entry visa for the presidential candidate of the Peoples Democratic Party (PDP), Alh. Atiku Abubakar, whose candidacy he endorsed on Thursday,” the statement read.

“It is learnt that that the former President who during and after leaving office insisted on Atiku’s unsuitability to govern Nigeria based on his knowledge of the latter’s extensive corrupt practices while he served as vice-president, is lobbying US authorities to withdraw the ban reportedly placed on Atiku from entering the United States following a 2005 $500,000 bribery scandal that involved Atiku, his fourth wife, Jennifer and former United States congressman, William Jefferson.

“Recall that the former president while in office had deployed enormous resources of the country on a global dragnet coordinated by the Economic and Financial Crimes Commission (EFCC) in getting Atiku prosecuted for corrupt enrichment and money laundering.

“A report by the United States senate permanent subcommittee on Investigations, chaired by senator Carl Levin reported that Atiku used offshore companies to syphon millions of dollars to his fourth wife in the United States, Jennifer while still the vice president of Nigeria between 2000 and 2008.

“The report further stated that then-president Bush had on the strength of his report, barred Atiku and other corrupt politically exposed persons from being issued visa to the United States, a reason for which he has been unable to travel to the United States till date.”