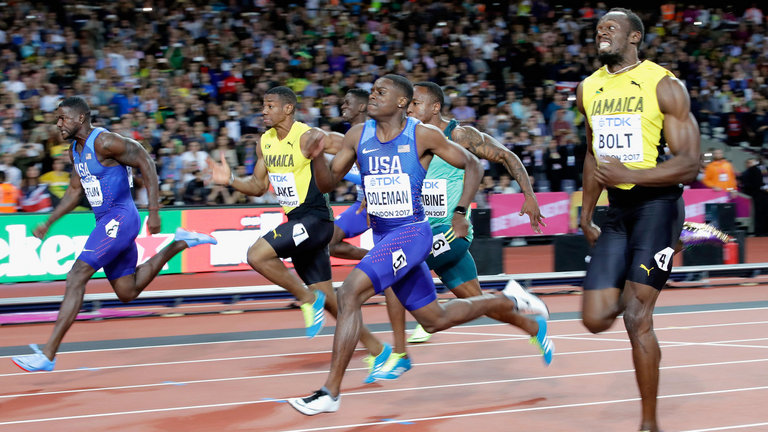 Usain Bolt loses to Gatlin in last 100m race, disappointed after World Championship defeat but says he has no regrets.

Usain Bolt had no regrets after his farewell to the 100m ended in a World Championship final defeat to old rival Justin Gatlin.

The Jamaican great had to settle for third inside London’s Olympic Stadium, where a chorus of boos greeted Gatlin’s win ahead of American counterpart Christian Coleman because of his previous doping violations.

Bolt admitted he was disappointed not to say farewell with victory – he still has the 4x100m relay to race before his retirement – but said he could have done no more.

“No regrets. I came out and did my best, I was always to end no matter what happened – win, lose or draw I was always going to walk away,” Bolt said.

“It doesn’t change anything in my career, I have done everything I can do for the sport and for myself. It’s time to go.

“It doesn’t change anything. I lost the race to a great competitor, I came third to a young kid coming up – he has a great talent and a great future ahead of him.

“No matter what happened this season I was going to come out and do my best. I did it for the fans, they really wanted me to do one more season.

“I worked hard, I’m definitely disappointed. No one is going to be happy they didn’t win but I knew I came out here and I gave my all.”

Bolt still went on a lengthy lap of honour after his defeat, much to the delight of the packed crowd, but some of the gloss of that celebration was taken away by the reaction to Gatlin’s victory.

The American has served bans for two doping offences but Bolt still paid fitting tribute to the 2004 Olympic Games 100m champion and now three-time world champion.Bolt added: “For me, over the years, he has done his time, if he’s here then it’s okay. I will always respect him as a competitor.

“Over the years he has worked hard and he is one of the best I have competed with. I know if I don’t show up he’s always going to win and he showed up.

“He deserves to be here because he’s done his time and he’s worked hard to get back to being one of the best athletes.

“He is a great competitor. I’ve always said that about Justin Gatlin. You have to be at your best and I wasn’t and that’s what I respect about him because he competes and I really appreciate competing with him.

“He’s an excellent person, as far as I’m concerned. He’s good at it and just a good person.” Source: Skysports