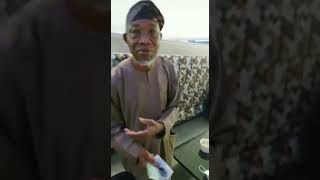 Nigeria’s minister of interior, Rauf Aregbesola, was captured in a video where he engaged with an unidentified man claiming to be a Nigerian in a U.S restaurant where he was having his lunch.

In a video making the rounds, a man recording the minister with a phone approached him and asked if he was Aregbesola from Nigeria. In response, the minister beckoned to the unidentified man to sit beside him and asked what he wanted. But instead, the stranger preferred to stay standing while attempting to ask questions.

In reaction, the Osun State former governor asked the unknown individual to stop recording him and made a move using his hand to cover the lens of the camera. The man swiftly responded saying the Nigerian minister can’t stop him from video recording adding that “this is America…”

Aregbesola who perceived the man’s action as an affront to the dignity of his person further asked the video man to stop intruding on his privacy saying the man does not have any right to record him without his permission.