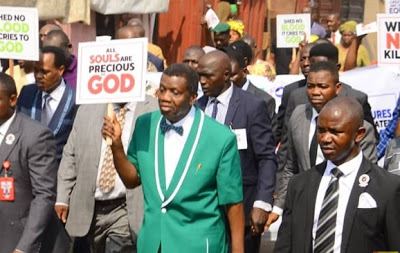 Pastor Enoch Adeboye, the General Overseer of the Redeemed Christian Church of God, RCCG, on Sunday led a massive protest against the killings of Christians and insecurity situation across Nigeria.

The procession was a protest aimed particularly against the constant killing of Christians in the North and other parts of the country.

Pastor Adeboye led the commencement of the protest at the end of the church’s monthly Thanksgiving Service at its National Headquarters in Ebute Meta, Lagos State, with a procession from Ebute Meta through Atan Cemetery in Yaba metropolis and back to the church.

Adeboye, who had instructed all members of his church across Nigeria to embark on the protest, said, “the prayer walk was aimed at offering prayers and supplications unto God to save Nigeria from being consumed by insurgents, terrorists, bandits, kidnappers, armed robbers, militants and ritualists in all our states.”

The Boko Haram terror group had recently beheaded the Chairman of Christian Association of Nigeria, CAN, in Michika Local Government Area of Adamawa State, Reverend Lawan Andimi while leaders of the association were reportedly accused the Buhari-led federal government of colluding with Boko Haram to kill Christians in the country.