HomeWhen the bridges were being built… Amosun Hammered in a Response to...
Featured 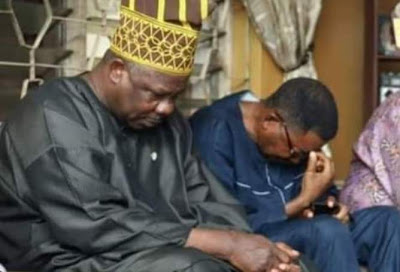 When the bridges were being built and ‘Ogun Standard Roads’ were on course by contractors, son of man’s advice to Senator Ibikunle Amosun was that the Abeokuta – Ibadan Road should be opened up instead. Dualising that road as OGD did to the Shagamu – Abeokuta Road would have boosted commerce and farming-related activities in the state capital.

Next was a suggestion on the inner roads of different adugbos in Abeokuta itself. The budget for a six-lane road in Abeokuta would have taken care of the rehabilitation of all these inner roads. But he did not listen. Our mutual friends instead of adding their voices were busy shouting about ‘Ogun Standard Roads’.

There is even a friend, an activist for that matter, who defended the erection of an air-conditioned pedestrian bridge in Abeokuta. Our argument was so bad that it almost resulted into a fisticuff. Of course, the same friend parted ways with Amosun later. Along with another, who I used to hold in high esteem, they messed up big time by bowing down to pecuniary gains.

My Ijebu friend defended Amosun’s decision to abolish TASUED at a time we were up in arms against it. He also parted ways with Amosun later.

“There was a Regional Master Plan for Ogun State, part of which would have taken care of the current mess in Iju, Alagbole, Akute all through Ijoko-Ota and back to the road that should have linked these areas directly to the Lagos – Ibadan Expressway. Nada. He began projects without plans. All became abandoned. Unnecessary demolition of properties became the order of the day. Yet, those who should talk kept mute.“

Eight solid years were wasted on white elephant projects. Yes, he remains a friend, because, despite the many criticisms of his actions, he did not come after me. He would even assist at some point. Maybe he knew son of man was speaking from the heart.

It was also interesting that his ‘boys’ never lifted a finger against son of man. For that, he will always remain my friend. But that will never take away the talks about the many messes he left behind.

The saddest was the ‘go away’ given to Dangote from Olokola by a man vindictive enough to look at things purely from a personal pecuniary and sub-ethnic prisms. He hated Ijebus with passion. Unfortunately, in trying to cut the nose in spiting the face, he threw away to Lagos State a beautiful project, Dangote Petro-Chemical Complex, which should have forever changed the face of Ogun State, industrially. Ogun Waterside being an Ijebu area should not have hosted it. A very unpatriotic decision taken by a vindictive individual pretending to be godly.

The rains are here with many of his boys among those shouting about bad roads. Ki le se fun odun mejo sirs? Ti e ba se awon ona yi, se o maa ri bayi ni? Funds were paid 100% to contractors ahead of handover last year on roads with less than 20% completion. Nobody among them spoke. The most viable business concern in Ajebandele owned by a supposed opposition and former Ogun State House of Assembly member was destroyed on his order. Nobody spoke. The site has been taken over by weeds now.

We’ll continue to talk and write. Yes, son of man is now part of the current arrangement. But that will never take Wale Adedayo away from this man of God. Ti a ba wi, a o ku. Ti a o ba so, odo Baba God naa la nlo. Awa a so tiwa. Eni ti o ba wu ni ki o fi ori sole! It might look slow. But things are taking shape across the state according to plans. No part will be left out, for whatever reason. We all own Ogun State, not just a section of it.