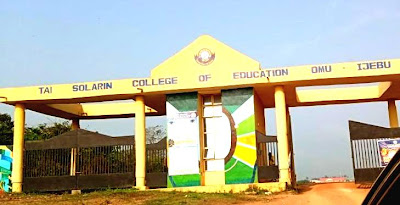 Making the clarification, the State Commissioner for Education, Science and Technology, Prof. Arigbabu, said it was imperative government take steps to resolve the age -long confusion in nomenclature by showing that two institutions are different entities named after two eminent sons of the State.

Going into the history of the College, Prof. Arigbabu stated that the erstwhile Ogun State College of Education was established by the state government to produced highly qualified middle level manpower to meet the needs in the education sector in line with the Ashby Commission report of 1960.

Following the death of the education icon, Dr Tai Solarin in 1994, Prof. Arigbabu stated further, the College was renamed Tai Solarin College of Education (TASCE) to honour the distinguished educationist. The College later metamorphosed into Tai Solarin University of Education (TASUED) following an official pronouncement of the then Governor of the state, Otunba Gbenga Daniel, on 29 January, 2005.

He said the pronouncement was later given the required legal backing via the Tai Solarin University of Education Law, 2005.

The Education Commissioner noted that the original intention at the commencement of the University was to have it subsume the erstwhile College hence the law that established TASUED made provision for this as part IX sections 65 to 69 of the law are very clear on this, stressing that section 69, subsections I and 2 put a legal seal termed “transfer to the University of land, properties and obligations of the College”:

“Subject to the provisions of this Law, every Deed, Agreement or other instrument or any arrangement whatsoever, to which the College, either by itself or through any other authority or person was a party Immediately before the appointed day shall, as from the appointed day, have effects as if the University had been a party to the same”, he explained.

Arigbabu noted that with the take over of the College, the University by right actually ‘inherited’ the name ‘Tai Solarin’.

Sequel to the refusal of the National Commission for Colleges of Education to allow the cohabitation of the College of Education with the University, a situation whereby the Provost, who was supposed to be the Chief Executive Officer of the then College was under the direction of a Vice Chancellor, the College was disarticulated from the University.

He said with the re-establishment of the College the name should have been changed, but the old name was however retained for some strategic reasons, which made the State to end up with two institutions with the name ‘Tai Solarin’.

“While a number of people have welcomed this development there were few that expressed reservations about the renaming. This group probably thought the name of our late sage, Dr Tai Solarin, was replaced with that of Kabiyesi”, the Commissioner concluded.