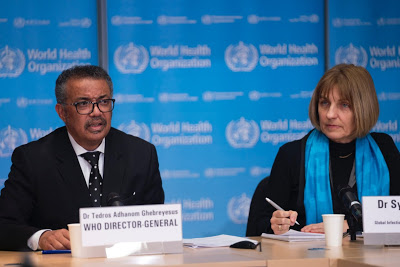 About $8.6 billion (N3.2 trillion) is required to implement the plan described by the WHO as a landmark collaboration against the pandemic.

The World Health Organisation (WHO), major world leaders and stakeholders on Friday launched Access to COVID-19 in Tools (ACT) Accelerator.

The News Agency of Nigeria (NAN) reports that ACT Accelerator seeks to speed up the development, production and equitable distribution of COVID-18 drugs, tests kits and vaccines around the world.

About $8.6 billion (N3.2 trillion) is required to implement the plan described by the WHO as a landmark collaboration against the pandemic.

The Director-General of WHO, Tedros Ghebreyesus, who hosted the event, said the world was in urgent need of tools being developed in some parts to combat the pandemic.

Mr Ghebreyesus described the pandemic as a common threat to humanity, and which could only be defeated with a common approach.

He said past experience had shown that when tools were available, they were not equally accessible to all, and “we cannot allow that to happen”.

“Our shared commitment is to ensure all people have access to all the tools to defeat COVID-19.

“The ACT Accelerator brings together the combined power of several organisations to work with speed and scale.

“Each of us are doing great work, but we cannot work alone,” he said.

In his remarks, Mr Macron pledged the commitment of France to the initiative, and called for global cooperation and backing for its success.

The French president said he hoped the United States and China put their differences aside in support of ACT Accelerator.

Mr Leyen said a pledging conference would hold on May 4 to raise the $8.6 billion needed for the plan.

In his remarks, UN Secretary-General Antonio Guterres, said the world needed the “most massive public health effort in history” to be free of COVID-19.

“The world needs the development, production and equitable delivery of safe and effective COVID-19 vaccine, therapeutics and diagnostics.

“Not a vaccine or treatments for one country or one region or one-half of the world, but a vaccine and treatment that are affordable, safe, effective, easily-administered and universally available, for everyone, everywhere.

Speaking on behalf of the African Union, President Cyril Ramaphosa of South Africa and Chairman of the regional bloc, said the world needed solidarity now more than ever to defeat the virus.

Mr Ramaphosa said although the entire world was experiencing the consequences of the disease, Africa was “extremely vulnerable” to its ravages.

He solicited global support and assistance to the continent to mitigate the impact of the pandemic, while pledging the commitment of the AU to the initiative.