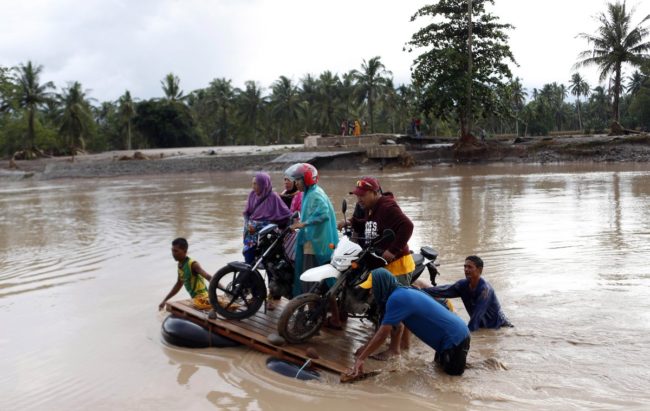 The death toll from a tropical storm in the southern Philippines climbed swiftly to 133 on Saturday, as rescuers pulled dozens of bodies from a swollen river.

Although the police confirmed the death toll, Romina Marasigan, spokesman of the National Disaster Risk Reduction and Management Council (NDRRMC), said that she had got unconfirmed reports of 75 people dead and 58 missing

Since Friday, tropical Storm Tembin has lashed the nation’s second-largest island of Mindanao since Friday, triggering flash floods and mudslides.

The Philippines is pummelled by 20 major storms each year on average, many of them deadly. But Mindanao, home to 20 million people, is rarely hit by these cyclones.

Rescuers retrieved 36 bodies from the Salog River in Mindanao on Saturday, as officials reported more fatalities in the impoverished Zamboanga peninsula.

“These reports were received from regional offices, these are consolidated reports but these are subject to validation and verification by the national NDRRMC,” Marasigan said, adding that the dead and missing are mostly from Lanao del Norte, Lanao del Sur and Zamboanga, largely due to landslides and flashfloods.

In the two provinces of Lanao, at least 22 bodies have been pulled out while over 40 are still missing as landslides buried houses along a national road, said Mujiv Hataman, governor for the Autonomous Region of Muslim Mindanao.

In the town of Salvador, Lanao del Norte province, disaster officials said they were still verifying reports that about 20 people have been swept away as floodwaters swamped many communities as Tembin dumped torrential rains in the region.

The death toll is expected to rise as more data trickle in from the affected villages and towns from storm-affected provinces.

The Philippine Atmospheric, Geophysical and Astronomical Services Administration said Tembin came ashore in the early hours of Friday morning in the Mindanao town of Cateel, packing winds of up to 125 kilometres per hour.

The storm barrelled to the west with its 400-km wide rain band drenching most of the country’s second largest island.

In the western peninsula of Zamboanga del Norte, authorities said they are still checking on reports that 30 people drowned due to storm surges in the coastal town of Sibuco.

Elsewhere, three fishermen have been reported missing off the coast of San Isidro town in Davao Oriental province, but police on Saturday said the fishermen have returned safely to shore.

Floodwaters have displaced over 50, 000 people in at least three provinces, said Leoncio Cirunay, regional head of the office of civil defence (OCD).

At least 21 flights have been cancelled at the Manila International Airport, mostly domestic trips to the affected regions.

Port authorities said over 6,000 passengers were stranded in various ports across the archipelago nation. The state weather bureau said Tembin, which re-intensified into a tropical storm after weakening into a tropical depression while traversing the southern Philippines, is expected to be out of the country by Christmas Day.

The storm was last spotted on mid-Saturday 245 km west-northwest of Zamboanga City with winds of up to 80 kph near the center and gusts of up to 90 kph.

The weather disturbance was moving west at 20 kph.

At least 20 typhoons and storms batter the Philippines every year. Tembin is the 22nd to enter the country this year.

Tembin came a few days after powerful storm Kai-Tak battered most of the central Philippines and parts of the Philippine main Luzon Island on Saturday, killing at least 41.