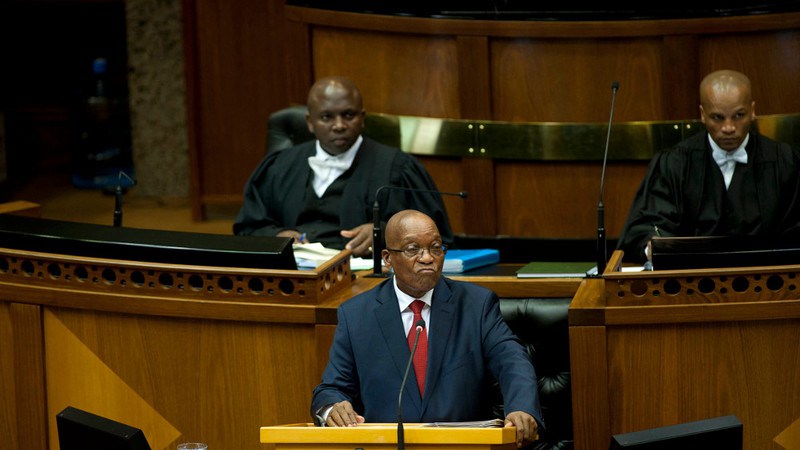 Former South African president Jacob Zuma told thousands of supporters outside court in Durban on Friday that his opponents were telling lies and he would be proven innocent in a corruption case against him.

Speaking in Zulu in his home province, Mr. Zuma said the judiciary and politicians believed that he did not have rights.

“The truth will come out. What have I done?” Mr. Zuma told the cheering crowd.

“I am innocent until proven guilty.”

The Durban High Court adjourned until June 8 the case of corruption in a 2.5 billion arms deal dollars, filed against Mr. Zuma.

Mr. Zuma’s legal team and lawyers for the state agreed to the postponement to give both sides time to prepare their submissions relating to charges against the former leader including fraud, racketeering and money laundering.

The 75-year-old, whose scandal-plagued nine years in office were marked by economic stagnation and credit downgrades, faces 16 charges including fraud, racketeering and money laundering.

Mr. Zuma denies any wrongdoing and is challenging the decision to prosecute the case, a dramatic development on a continent where political leaders are rarely held to account for their actions before the law.

Wearing a dark suit, a smiling Mr. Zuma waved to crowds of supporters and reporters as he mounted the steps of the High Court in Durban shortly before 0700 GMT.

The speed with which prosecutors have booked his day in court is a sign of the loss of control Mr. Zuma has suffered since his successor, Cyril Ramaphosa, became head of the ruling African National Congress (ANC) in December.

However, Mr. Zuma still retains some popular support, especially in his home province of KwaZulu-Natal, where the case is being heard.

Heavily armed police in riot gear lined the square outside the court, as thousands of Zuma supporters gathered to express solidarity with a leader they say is the victim of a politically motivated witchhunt.

Marchers, many clad in the distinctive yellow, green and black of the ANC, carried placards reading “Hands off Zuma” and performed the high-stepping toyi-toyi protest dance made popular in South Africa’s decades-long struggle against apartheid.

Businessman Siya Khoza said he admired Mr. Zuma’s determination to bring in economic policies that he said were designed to spread the wealth in what remains one of the world’s most unequal societies.

“Whatever happens we will still support Zuma because we believe he brought us radical economic transformation and we still believe that him being in the ANC he will push for it,” said Khoza, wearing a waistcoat emblazoned in ANC colors.

Mr. Zuma’ son, Edward, told supporters at nearby park where several thousand people held an overnight vigil that his father was not worried.

“I would want to believe that as an innocent man, he is definitely not worried,” the domestic News24 agency quoted Edward Zuma as saying.

Mr. Zuma, who was forced to resign by the ANC last month, was at the center of a 1990s deal to buy billions of dollars of European military hardware to upgrade South Africa’s post-apartheid armed forces.

The deal was mired in scandal and controversy from the start, with many inside and outside the ANC questioning the spending given the massive social issues, from health to education, Nelson Mandela’s party had to address after coming to power in 1994.

Fallout has cast a shadow over South African politics ever since.

Mr. Zuma was deputy president at the time. Schabir Shaikh, his former financial adviser, was found guilty and jailed in 2005 for trying to solicit bribes for Mr. Zuma from a subsidiary of French arms company Thales.

The company is facing charges in the same case.

Charges against Mr. Zuma were filed but then set aside by the National Prosecuting Authority shortly before he successfully ran for president in 2009.

The charges were re-instated in 2016.

Since his election nine years ago, his opponents have fought a lengthy legal battle to have the charges reinstated.

Mr. Zuma countered with his own legal challenges.