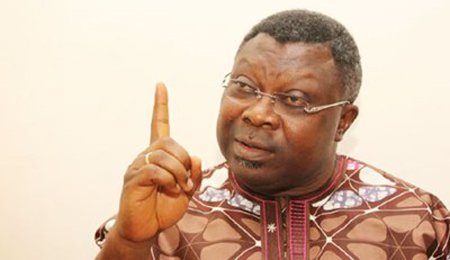 Suspected loyalists of Iyiola Omisore had on Thursday invaded the Peoples Democratic Party (PDP) secretariat at Ogo Oluwa area of Osogbo, lowered the party’s flags and set them on fire.

They also vandalised the party’s signpost, logo, and emblem.

This is coming after Omisore lost out in a recent PDP congress of the Osun State chapter.

The result of the Congress technically placed the state chapter of the PDP in the hands of his perceived political opponents – within the party.

Newsheadline247 understands Iyiola Omisore is virtually out of the People’s Democratic Party.

A source disclosed his next political destination is the Social Democratic Party (SDP).

His gubernatorial ambition was also said to be a core reason he is dumping a party he is known to be a key figure and decision maker.

Mr Omisore’s loyalists had initiated a string campaign for him to move to the SDP in order to contest as the candidate of the party in the September 2018 Osun state gubernatorial election.

According to a report monitored on societynews.ng, Mr Omisore bowed to the pressure from his supporters, but with a condition attached.

He wants a judgment to be delivered in a case he instituted against those that outmaneuvered him in the PDP before announcing his departure.

The judgment has been scheduled for Tuesday, April 10, 2018

Insiders revealed he gave his loyalists the go-ahead to announce defection to the SDP once the ruling goes against him.

It was also gathered that Mr Omisore had recently approached two different political parties but was rejected with reasons hinged on his political desperation.

However, the PDP stakeholders in Osun, under the aegis of Ex-PDP Political Office Holders, have condemned the burning of the party’s flags in Osogbo by Sen. Iyiola Omisore’s suspected supporters.

The group, at a news conference in Osogbo on Friday, said that they were saddened and disappointed by the action of Omisore, who they accused of supervising the burning of the flags.

The party said Omisore’s action was the peak of his self-determined war against the PDP, the party which he had been a major beneficiary from.