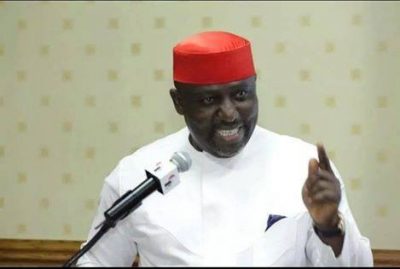 Rochas Okorocha, the Imo State Governor, on Tuesday said people of the South East has pledge their support for Buhari ahead of the 2019 presidential election.

The governor said although, Igbos never believed in President Muhammadu Buhari in 2015 but the region we support Buhari’s reelection in 2019.

Okorocha, Chairman of the All Progressives Congress, APC, Governors’ Forum said this while addressing party supporters during a mega rally in Owerri, the state capital.

According to Okorocha, “Igbos never believed in Buhari in 2015 but for 2019, Igbos have declared for Buhari.”

The governor expressed hope that the emergence of Adams Oshiomhole as National Chairman of the party and recent developments had re-positioned it for the 2019 general elections.

Okorocha said, “This man (Oshiomhole) coming is like a beacon of hope for the APC.

“We also want to correct the impression that there is no APC in the South East which has led to some of our leaders in Abuja negotiating with the governors in the South East to vote for Buhari for President to gain their support in return.

“Ladies and gentlemen, that act can best be described in the Rochas dictionary as an act of Iberiberism. If anybody wants to support APC, it must be total. There is no partial support for APC for President and support the governor differently.”