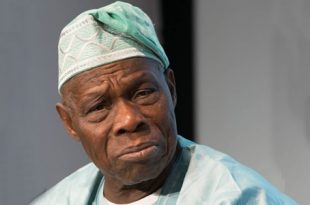 Nigeria’s opposition party, the People’s Democratic Party, has rejected the call for a coalition to dislodge the ruling All Progressives Congress from power in 2019 The Guardian NG reports.

The country’s former leader Olusegun Obasanjo said in a statement on Tuesday that President Buhari has performed below par and advised the 75-year old leader to shelve any plans to seek re-election in 2019.

“Such would amount to repeating the same blunder that brought in the ideologically vacuous APC and the (Muhammadu) Buhari presidency which has now wreaked havoc on the nation in its almost three years of governance,” PDP’s spokesman Kola Ologbondiyan said in a statement on Tuesday.

Obasanjo, who led Africa’s most populous country from 1999 to 2007, supported Buhari’s ascension to the country’s top post and has previously defended his performance. His Tuesday marked a remarkable turnaround.

“President Buhari needs a dignified and honourable dismount from the horse,” Obasanjo said in the statement.

“He needs to have time to reflect, refurbish physically and recoup,” he added.

According to him, the “Coalition for Nigeria will be a movement that will drive Nigeria up and forward. It must have a pride of place for all Nigerians, particularly for our youth and our women. It is a coalition of hope for all Nigerians for speedy, quality and equal development, security, unity, prosperity and progress.”

But the PDP, a party on whose platform Obasanjo was twice elected as the Nigerian president, first in 1999, then in 2003, said the former president’s call for a third force that could counter the influence of both the APC and PDP was unnecessary, insisting that it remained the only viable option to wrestle power from the ruling party.

The opposition, Ologbondiyan said, has become a centre of the new patriotic and broad-based engagements by “well-meaning Nigerians and coalitions across the board, including past leaders, in rekindling our democratic process that places priority on returning power to the people.”