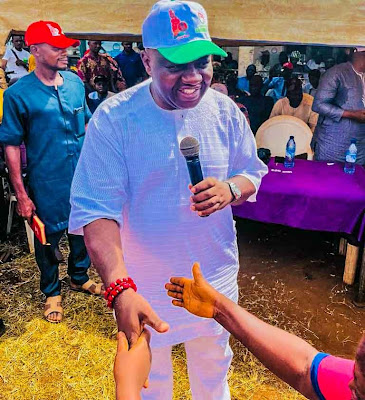 Residents and party loyalists in Imeko-Afon and Yewa North local government areas of Ogun state have rented out their frustration and what they termed, ‘deliberate denial’ from all the representatives of the ruling All Progressives Congress (APC) in Ogun state, most especially, in Ogun west Senatorial district.

It was amidst mixed feelings that supporters and sympathizers of Ogun west Senatorial hopeful, Chief Ganiyu Adeleke Dada (Obanibashiri) and other PDP would be candidates, trooped out to welcome them to the party’s ward to ward meeting which is being currently embarked upon by the party leaders across the state.

Earlier, while receiving Obanibashiri and his team at the party secretariat in Imeko on Thursday, the Lisa of Imeko and a PDP Chieftain in the state, Chief Paul Adesina Adejobi, decried the ‘terrible state of infrastructures and poor governance by the current APC political office holders in Ogun state and in Nigeria as a whole’.

He said that, ‘Nigeria was not as terrible as it currently is when the PDP handed power about 8 years ago’. Adding that prices of commodities in the common men’s market has skyrocketed due to the inability of those voted into power to formulate policies that could better the lots of its people.

Chief Adejobi, however, asked the people of Imeko-Afon to believe in the project of Obanibashiri and work tirelessly to ensure his victory at the polls in 2023 as he is a true son of Ogun west and he has a proven track record in the private sector which he has been for several decades, while also advising electorates that some big ‘money bags’ are coming with huge cash in order to buy their conscience, but they should receive the money because it is their ‘right’, and vote in who would truly turn the fortunes of the state and that of Ogun west especially, around.

“They are coming with our stolen money in millions to buy your conscience. I advise that you collect the money from them because it is your common wealth and sweat. Then, vote those who are genuine indigenes of Ogun west and the person that has the interest of this state at heart. That is why we are appealing to you to vote Hon. Ladi Adebutu for Ogun Governor, Chief Ganiu Dada for Ogun west Senate and other candidates under the umbrella of PDP across the state”.

Chief Ganiyu Adeleke Dada, while addressing the obviously excited crowd, said though, the gathering is not for campaign, but the huge crowd that turned for the ward to ward meeting is evidence that they are indeed interested in the project, ‘Obanibashiri’ and that they were already tired of pretense amidst hunger and under-representations.

He added that he will surely perform beyond conviction when given the opportunity to serve them as there is ‘burning passion and desire to serve in him’. He assured that he will return to the town with his Principal, Hon. Ladi Adebutu when the case at the Appeal court is finally won in a fortnight.

In a similar twist, the train stopped at the town hall in Aiyetoro to meet with party stakeholders in Yewa North local government.

Welcoming Chief Ganiu Dada and his team, Ogun west Senatorial Chairman of PDP, Elder Sunday Soledolu, assured him of a block vote from the local government and that he should work on securing a landslide victory in Ota, which is his constituency in that the people of Yewa North were prepared to end ‘bad representation’ in the region and they will give in everything it takes to stop ‘impersonation’ at the coming polls.

Chief Dada, who assured party stakeholders of ‘excellent and effective representation’, asked them to go all out to collect their permanent voters card when INEC bring it to their wards and ensure they prevail on others to do same too.

The train as gathered, will touch down all other local government areas of Ogun west in a familiarization visit across all the wards in Ogun west Senatorial district.