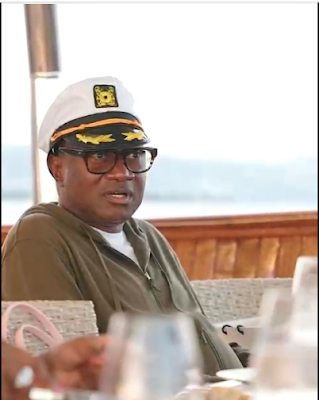 The gap between the rich and the poor is as wide as the Grand Canyon. From the ways they live in opulence and style to the places they go, the moneyed class never wavers in the tiniest of details that concern their well-being.

Thus, as billionaire Femi Otedola clocks 60 tomorrow, Friday, November 4, he will not go the way of a typical Nigerian celebrating such a milestone. The gangling billionaire businessman will instead spend about three weeks on the iconic super yacht, Christina, owned by the late Greek billionaire shipping magnate, Aristotle Onassis.

A private jet ferried his children and Nana, his wife, from London to Venice, Italy. From there, they would likely visit the typical cruising regions of the yacht like Antigua, Bahamas, Cuba, Mykonos, Ibiza, Saint Martin, St Barts, Virgin Islands, and Costa Rica among others.

Already, the self-styled ‘Gentleman of Leisure’ has shelled out about €3million to hire the luxury yacht, which costs a staggering €750, 000 per week and comes complete with every amenity that makes life worthwhile. He is the first African to hire the Christina for use. The Otedolas will have it for three and a half weeks. The Epe-born chairman of Geregu Power Plant Plc toured the yacht recently. A video of the tour exclusively obtained by The Capital sees him being shown around the Christina named after Onassis’ first daughter, Christina.

The yacht has a master suite, 18-passenger staterooms, and numerous indoor and outdoor living areas, all connected by a spiral staircase. The number of living areas is large, and the amount of outdoor deck space is generous while the aft main deck has an outdoor pool with a minotaur-themed mosaic floor that rises at the push of a button to become a dance floor.

The exterior of Christina O easily stands out among other super yachts thanks to her distinctive clipper bow, long sheer line, rounded superstructure, and dazzling white topsides, not forgetting her trademark, vibrant yellow funnel. A variety of vast open-air spaces offer a multitude of options for lounging and socialising. The top level of the yacht, known as the compass deck, is well-primed for sunning, with a line of chaise loungers and a bar, while the spacious promenade deck below features an aft spa pool, and alfresco dining and bar setup.

Starting life in World War Two as a Canadian frigate, Christina O was purchased in 1954 by Onassis, who transformed her into the most luxurious private yacht of her time. She played host to many illustrious guests, ranging from Marilyn Monroe and Frank Sinatra to John F Kennedy and Winston Churchill among others. Churchill gifted Onassis his1921 landscape painting titled The Moat Breccles, which used to occupy a pride of place on the yacht until it was auctioned last year.

Onassis epitomised the life of the super yacht elite, garnering a reputation as the original jetsetter, but following his death in 1975, Christina O fell into disrepair. Luckily, a meticulous restoration project led by a family friend of Onassis was completed in 2001 and, today, charterers can enjoy the resonance of her unique past with the ultimate in luxurious accommodation and on-board service.

Now, this is where it gets interesting. Otedola considers Onassis, who died in 1975, as a role model. In his lifetime, Onassis amassed the world’s largest privately-owned shipping fleet and was one of the world’s richest and most famous men. At a time, too, Otedola was the largest ship owner in Nigeria. He also owns a yacht, the lust-inducing ‘Nana’, which is always at shore, lazing languidly to the cadence of the sea. They also share a mutual love for luxury living.

After living in Europe’s luxury cities, Otedola recently joined the increasing exodus of billionaires ‘relocating’ to the desert sheikhdom of Dubai where he splurged on a sprawling multi-million dollar mansion.

The pristine, white multi-storeyed building sits atop a wide expanse of land and comes complete with a swimming pool and many other luxury accoutrements. It has breathtaking views and surrounding greenery. Its elaborate decor and interior effortlessly ooze panache and prosperity. Otedola reportedly bought the property last April and has been operating from there because of the ease of connecting Africa or Europe for business or routine junkets.

In the wake of the Covid-19 wave, many international businessmen found a home in the glitzy emirate because of its perception as a relatively safe and less restrictive city than many other cities around the world. Otedola would not miss the train. Despite leaving Europe, he will not be in short supply of the many luxuries that make the world go round like luxury shops, restaurants, beaches, and, more importantly, tax benefits.

But what now happens to his other properties across the world? Just about three years ago, he acquired a new home in the scenic, upper-crust Monte Carlo area of Monaco, which offers the best in ultimate luxurious living and views to die for.

Otedola bought a gasp-inducing property in the tiny yet, exclusive principality where the Alpes Maritimes meet the Mediterranean; where one in three people is a billionaire, and where your next-door neighbour could be Lewis Hamilton or Novak Jokovic.

From the penthouse of the property, which size and splendour would leave anyone breathless and bewildered, guests have a bird’s eye view of the city, especially its rolling hills and Grand Prix races. Like his home in the billionaire’s haven, St John’s Wood, London, the new addition to Otedola’s property portfolio set him back a few tens of millions of pounds! Genial and generous, the billionaire business mogul had planned to spend more time from next year on the sun-kissed Mediterranean coast until the allure of Dubai proved to be too strong.

Home to about 38,000 people, which makes it the second-smallest independent state in the world, Monaco, with a global reputation of lavish wealth, glitz, and old Hollywood glam, has the highest per capita GDP in the world.

A playground for tourists and a haven for the wealthy, Monaco’s allure is in its combination of balmy weather all year round, political stability, and a calendar packed with high-profile events such as the Monaco Yacht Show and the Grand Prix, one of Otedola’s favourite pastimes.

Indeed, the last decade has been that of increasing prosperity for Otedola. Some years back, he divested his 75percent direct and indirect shareholding in Forte Oil’s downstream business. It was with Forte Oil that the successful businessman achieved a different level of prosperity so much so that by 2015, he was listed as the 16th richest man in Africa by Forbes. He is now the chairman of the 414 MW Geregu Power Plant.

Blessed with vigorous optimism, a boots-on-the-ground approach to his endeavours, and an unflinching belief in destiny (read God), it did not come as any surprise that barely a decade after he ventured into the oil and gas business, his Forte Oil Plc, an integrated energy services provider among other business concerns, was soon leading older and more established players in the industry by the hand.

The son of former Lagos State governor, Late Sir Michael Otedola, Femi was born November 4, 1962, and began his business life managing his father’s printing press. His trajectory can be surmised with the words of constructionist historian, E.H Carr, who, in his book, ‘What is History’; agrees that while the society offers a platform for individuals to achieve set goals, there are exceptional personalities whose vision and strength of character have significantly shaped, defined, and influenced their respective societies.