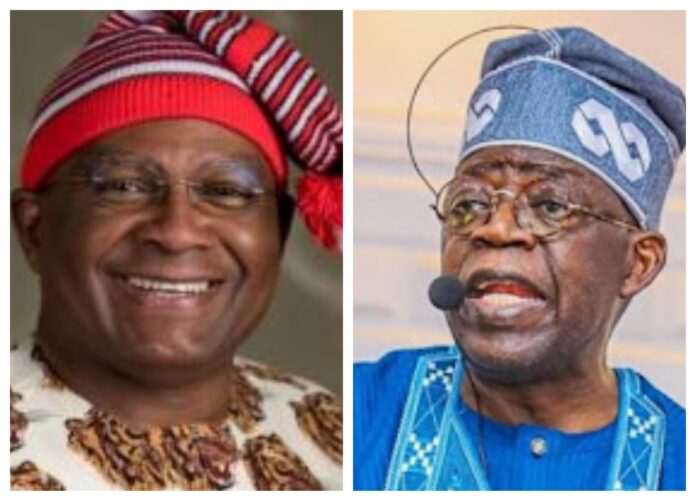 A Senator from Enugu State, Chimaroke Nnamani, has continued his series of praises for the APC presidential candidate, Asiwaju Bola Tinubu by pointing put out the latter’s achievements in the judiciary during his time as governor of Lagos State between 1999 and 2007.

According to him, the Tinubu-led administration adopted several of the recommendations provided by the judicial committee, including eliminating corruption from the legal system.

This was contained in a statement he signed and sent out to journalists.

This is not the first time Senator Nnamani, a former governor of Enugu State, will openly support and “campaign” for Tinubu despite being a member of the opposition Peoples Democratic Party (PDP).

Former vice president Atiku Abubakar is the presidential candidate of the PDP.

Nnamani’s statement comes three days after he asked Igbos to stop fighting the Yorubas and begin to see the possibility of a Tinubu-led federal administration.

He was initially listed as a member of the APC presidential council but was removed in the reviewed version.

Senator Nnamani, representing Enugu East Senatorial District, said besides improving the welfare of judges and magistrates when he was governor, Tinubu also made efforts to streamline the hiring process.

He said the input of the Lagos State branch of the Nigeria Bar Association was solicited about judicial appointments and recruitment done entirely on the basis of merit and the recommendations of the Judicial Service Commission – which was also charged with investigating all complaints made against judges and magistrates.

He further said Tinubu assisted the NGOs and civil society organisations to arrange seminars and workshops on human rights and good governance in order to enlighten the people on their social responsibilities and support for his vision for a better Lagos State.

“On the promotion of legislation and laws, the Lagos State House of Assembly’s standing norms then permitted press coverage of its public sessions, and new laws approved by the house were highlighted on the ministry of justice website as a measure to publicise the laws and bring them to the attention of the general public.”

Besides improving the welfare of judges and magistrates, the senator said Tinubu ensured that Law Corps members who graduated with at least Second Class Upper, worked as research assistants for judges and received a competitive remuneration of about N50,000 monthly.

“Other reforms implemented under Tinubu included the verbatim recording of judicial proceedings, court automated information system – which I beat him to, criminal case tracking system (CCTS) and establishment of a citizen mediation centre – a system for alternative dispute resolution that offers a conflict-free setting for resolution.”

For weeks, Nnamani has been praising Tinubu’s performance as governor of Lagos State but his party, the PDP has not said a word to condemn or sanction him for anti-party activities.