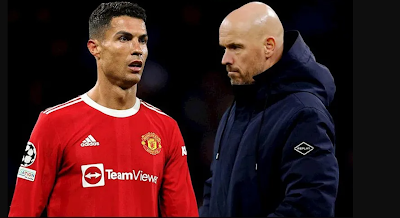 Football great, Cristiano Ronaldo has lashed out at his club Manchester United, saying he felt betrayed by the club and has no respect from the coach Eric Ten Hag.

“I feel betrayed by Man United. Manchester United tried to force me out,” Ronaldo revealed. “Not only the manager but also the other guys who are around the club. I felt betrayed.”

The five-time Ballon d’Or winner disclosed this in a no holds barred 90-minute TV interview with Piers Morgan on Sunday, berating Ten Hag.

“I feel that some people didn’t want me at Manchester United, not only this year but last season too,” added Ronaldo. “I don’t have respect for Erik ten Hag because he doesn’t show respect for me. It’s simple.”

Ronaldo did not feature in Manchester United’s away game against Fulham, which United won 2-1 on Sunday night.

The football superstar had wanted to leave United due to play in the Champions League, but Ten Hag insisted “Ronaldo is not for sale.”

“He is in our plans, and we want to get success together,” stated the coach.