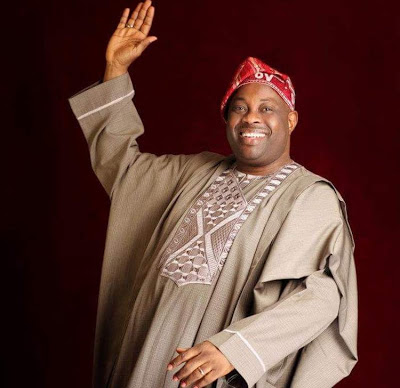 Now that this great man of many parts; a publisher, columnist, motivational speaker, philanthropist, politician, businessman and CEO of Ovation International Magazine has joined the club of sexagenarian, no words are too much to celebrate him and he deserves all the ovation we could offer him.

Ekundayo Asaju, the publisher of Firstweekly magazine, has described Nigerian celebrated veteran journalist, Dele Momodu aka Bob Dee, as a man of many parts and journalism pacesetter.

While extolling Momodu in a beautiful eulogy titled Bob Dee At 60, Man of Many Parts, Journalism Pacesetter and first published on the firstweekly magazine website, Asaju further described Momodu, publisher of Ovation Magazine as motivational speaker and philanthropist.

Below is the full text of Bob Dee at 60, Man of Many Parts, Journalism Pacesetter by Dayo Asaju unedited.

The likes of Dele Momodu aka Bob Dee is today being celebrated, not because he was from a silver spoon family, but because he stooped to conquer and took all the risks to get to where he is today as a successful veteran journalist of note.

Love him or hate him, the great Bob Dee is a leading light in the journalism profession in Nigeria, Africa and even the world as a whole.

Now that this great man of many parts; a publisher, columnist, motivational speaker, philanthropist, politician, businessman and CEO of Ovation International Magazine has joined the club of sexagenarian, no words are too much to celebrate him and he deserves all the ovation we could offer him.

Indeed, we are all proud of erudite and cerebral Bob Dee for his enviable achievements in the field of journalism despite all odds and he is someone we look up to for direction even as he continues to soar higher and make all of us happy with his activities; first as a journalist and secondly as a passionate Nigerian, who wants the best for his people and the country generally.

Our paths first crossed in the early 90s, when he was with the defunct Weekend Concord under the leadership of another veteran journalist, Mr. Mike Awoyinfa and the late Mr. Dimgba Igwe and I was with the now rested Fame Magazine.

Bob Dee would breeze into the newsroom and the atmosphere would change immediately, he has that alluring aura that arrests people’s attention.

He was close to everyone, he was never alone whenever he visited, he was either in the company of the incumbent Oba of Oke Ila Orangun, Osun State, His Royal Highness, Oba Dokun Abolarin or the son of a former governor of Oyo State, Dr Victor Omololu Olunloyo, Kapoor.

With time, he started writing “Pendulum,” a column he was writing for Fame Magazine, the column was and is still a must read for the discerning minds till date.

He had so much influence that at a point we started thinking he was a shareholder in the company; so much for his loyalty to his friends.

Lest I forget, the whole idea of the magazine was conceptualized in his little abode off Medical Road, Ikeja, Lagos, where Bob Dee was staying before vacating the Multi-Purpose self-contained apartment for another veteran journalist and publisher of Encomium Magazine, Mr. Kunle Bakare, who he had adopted as a brother.

There was so much excitement in the office the week he moved to a three bedroom room apartment such that we did a story on it, which featured prominently in the Society Page of Fame Magazine with the caption; “Dele Momodu Moves Into 25,000 Apartment at Adigboluja.”

His exit from Fame Magazine wasn’t as exciting as his entrance, he was already safely in exile in London before we knew it. What led to his exile is already in public domain.

I remember vividly the formative years of Thisday Newspapers; he was one of the arrow heads, nothing compared with the kind of passion and commitment he exhibited, all for the publisher of the Newspaper, Mr. Nduka Obaigbena.

Bob Dee is a man of the people, a jovial fellow, easy going, ambitious, courteous, loving, and accommodating.

He is not temperamental and he allows people to express their views on any given issue before coming up with his decision even as a boss or leader.

I can safely say that Bob Dee is a libertarian, socialite and an extrovert.

He is never afraid to express his views and opinions on any given issue and these have stood him out amongst his contemporaries in the country. No wonder, his columns are a must read for those who want to have insights into burning issues in the country.

Bob Dee is creative, adventurous, he is a motivator, an encourager, a workaholic, a prolific writer with a good grasp of English Language, and a flowery writer by all standards.

He loves entertainment, and he has a good sense of aesthetic, which is manifested in his legendary and award-winning Ovation International Magazine.

I like to recall some of my memorable experiences with Bob Dee. It was at his Adigboluja residence that I first met with Kola Abiola, who came to celebrate a social event with him and his household,

The very first personality he recommended and connected me with was Taiwo Lakanu, who retired recently as a Deputy Inspector General of Police (DIG), and so much was his interest in the growth of any young reporter with potentials that he would go the extra mile to soften the way for a full growth and success.

When I told him the implication of such a request, he said in his ever friendly tone; “Clear Leader, when it comes to the consequences of my actions, I don’t abandon my friends.”

Yes, true to his words, decades down the line, he’s still holding on to the promise; I thank him for this. There are so many evergreen experiences with Bob Dee to recall, but the bottom line is, he has a large heart and forgives easily like his mentor, the late Bashorun Moshood Kashimawo Olawale (MKO) Abiola.

It is hard to state what one does not like about Bob Dee. May be I can say he is nice to a fault, blunt, fearless and friendly. These could work against someone in our contemporary days and our peculiar society, where people believe in deceit and pretence.

Bob Dee is a politician, so to say, but he is probably not playing the type of politics we play in Nigeria, where people move from one political party to another and embrace do or die politics (his friends cut across party lines).

He is not in that category and he hardly attacks his opponents both verbally and otherwise unless the opponent fires the first shot, he knows how to respond and such responses could be acerbic.

Moreso, Bob Dee does not discriminate in his dealings with people and he doesn’t believe in class segregation, may be these are faults too.

Bob Dee is a jolly good fellow with immeasurable contributions to the growth of journalism in Nigeria. He bestrode the journalism industry like a colossus and his days in African Concord Magazine, Concord Newspapers, and Classique Magazine are for the records with his accomplishments.

He would later stand on his own to establish the now popular celebrity publication, Ovation International Magazine.

Suffice to say that Bob Dee is a fiery, emphatic and fearless writer, who freely expresses his views on national and burning issues through his column and during public appearances, not minding, whose ox is gored.

I wish Bob Dee more ink to his pens, long life, good health and prosperity. I also wish that Bob Dee would continue to be relevant to the industry that discovered him and brought him into reckoning both in Nigeria and abroad.

My wish is that God will continue to give Bob Dee more ideas as he is postulating in his columns on a regular basis.

Bob Dee is a shining star in the journalism industry and I pray that his star will not go dim and he will continue to be relevant in the scheme of things in the country.

I wish this gentleman a minimum of four more decades on the planet earth, by that time he can now be preparing to meet his creator may be after another one decade or more.

At that time, his Centenarian experience and knowledge would be useful for both born and unborn generations of journalists and writers in Nigeria.

60 ‘gbosas’ for one and only Bob Dee of the universe.

Thanks and God bless.
Ekundayo Asaju,