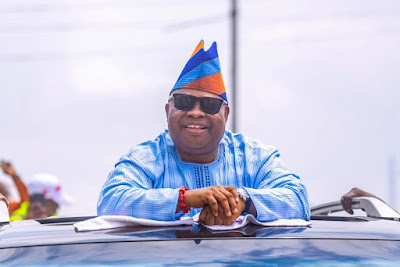 Ademola Adeleke has been sworn in as the governor of Osun state at the Osogbo city stadium today, Sunday, November 27, 2022.

Speaking after his swearing-in, Adeleke said he is “well aware” of the expectations from the residents in the state and that he will be a servant to all.

The governor said his reforms will cut across education, security, healthcare, infrastructure, local government administration, judiciary, public service, adding that his administration will be labour friendly.

“I am well aware of the fact that my responsibility as governor and chief security entails meeting the expectation of our people.”

Adeleke also reversed all appointments made by the immediate past governor, Adegboyega Oyetola, effective from July 7th, 2022.

Governor Adeleke ordered that all government bank accounts be frozen.

He also stated that all actions of the Oyetola administration from July 17th will be revisited.

Recall that Adeleke, who contested the governor election on the platform of the Peoples Democratic Party (PDP), defeated Gboyega Oyetola of the All Progressives Congress (APC) who was seeking re-election.