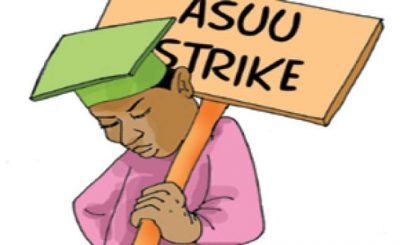 The President of the Academic Staff Union of Universities (ASUU), Prof. Biodun Ogunyemi has said that the on-going strike would continue until the Federal Government was ready to meet the demands of the union.

Prof. Ogunyemi who made this known on Sunday while addressing a press conference at the University of Lagos also alleged that the Federal Government was not committed to implementing the outstanding issues in the FG-ASUU 2009 agreement.

“Since the commencement of our industrial action on November 4, 2018, we have had six meetings with the agents of the Federal Government, with no clear commitment from government to meeting our demands. Government has adopted the ‘keep-them-talking’ strategy while deceiving the public that progress was being made and that partial agreement had been reached between the government and the union.

“Through its press interactions, the government had falsely raised the hopes of the Nigerian public on the state of discussion with our union. Our expectation from a very responsive and sincere government is that, by now, all outstanding issues would have been resolved to the satisfaction of both parties. Unfortunately, the government has yet to show sincerity to addressing the problem,” Ogunyemi said.

The ASUU President said the outstanding issues in the 2009 FGN-ASUU agreement, 2013 MoU and 2017 MoA which led to the on-going strike are, commitment to implementing the 2013 MoU with respect to the balance of N1.1tn revitalisation fund for public universities; release of the report of forensic audit on the Earned Academic Allowances, payment of outstanding arrears, and mainstreaming the allowances into the 2018 budget; payment of arrears of shortfalls in the salaries of university academics; renegotiation of 2009 FGN-ASUU agreement and removal of the fixated Chairman of the negotiating team, Dr Wale Babalakin, among others.

Share
Facebook
Twitter
Pinterest
WhatsApp
Linkedin
Tumblr
Telegram
Previous articleLagos 2019: Ambode’s mandate group in solidarity march for Sanwo-Olu
Next articleDetails: My son is not a fraudster – KWAM 1 reacts to reports on Sultan’s arrest over Fraud in US