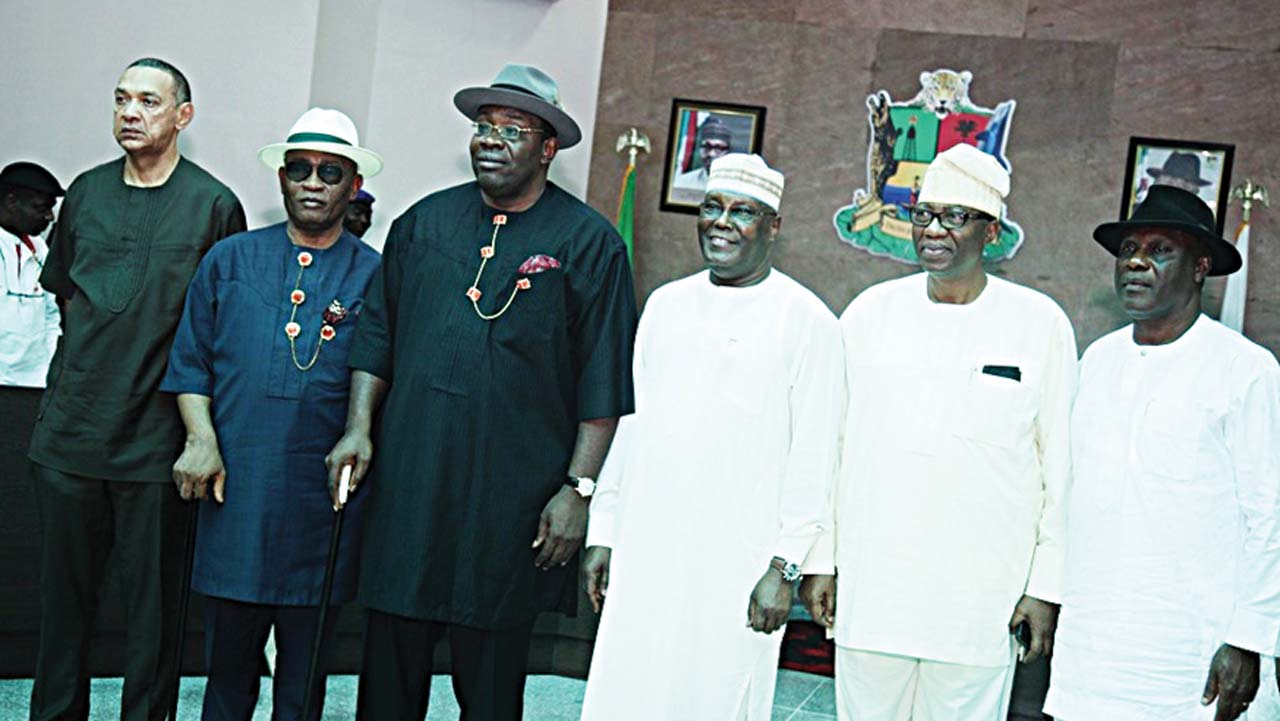 Former Vice President and Peoples Democratic Party presidential hopeful, Alhaji Atiku Abubakar, on Tuesday, said he was ready to face and fight dictatorship and all other anti-democratic forces in the country.

Atiku made the declaration at the Bayelsa State Peoples Democratic Party (PDP) secretariat while addressing the crowd of supporters.

The Waziri Adamawa said he was in Bayelsa to reconnect with them and stand up for the fight ahead against anti-democratic forces and dictatorship.

“If you remember, I can fight or face anyone. I was in the vanguard of fighting the military. Though many lives were lost, we were successful. I am ready to change the change,” he said.

Atiku also assured that the Niger Delta peoples’ yearning for a restructured Nigeria becomes a reality in 2019 if he is voted in as Nigeria’s next president.

The former vice president boasted that he had the courage to readjust the current governance structure in the country, just like he stood up to military dictatorships in the past, insisting that Nigeria could not run away from the rising calls for restructuring.

He was in Yenagoa, the state capital, to consult with Governor Seriake Dickson and members PDP in Bayelsa. He urged them to support his presidential ambition to achieve a better life for all Nigerians.

Atiku who was in company of former governor of Ogun State, Gbenga Daniel and the immediate past Minister of Nigeria Delta Affairs, Elder Godspower Orubebe arrived the Government House in Yenagoal at about 12 pm and immediately went into a closed-door meeting with Governor Dickson.

After the meeting, which lasted a few hours, Atiku and Dickson addressed an enlarged team of state political appointees, PDP chairmen and elders as well as the speaker and other members of the House of Assembly.

Atiku commended Dickson for the reception accorded him and the infrastructural development noticed in the state. He hinged the achievement on the continued governance of Bayelsa by the PDP.

The presidential aspirant, who said he had followed Dickson’s advocacy on restructuring, said: “I agree with you, and should let you know that I have been advocating restructuring 2004.

I want to invite you to join me, to work together with me ahead of 2019 so that we can do it together.”

Atiku later presented a book written by him on the need for proper restructuring of the country to the Bayelsa governor.

Dickson described Atiku as a veteran in politics, noting that the 2019 presidential election will be a referendum through which the Nigerian voter will decide on who should govern them.

“All of us know the character of the party in government. I call on the PDP to have cohesion so that when we put our best feet forward, the party will stand stronger. I call for cohesion and rejection of dictatorship.”

At the PDP secretariat in Yenagoa, Atiku was welcomed by a crowd of party supporters with the two roads leading to the venue blocked.

According to Orubebe, among the presidential aspirants within the party, Atiku is the only one qualified to salvage the country.

“I have looked through all the aspirants for who can manage the country, it is only Atiku that I see. Atiku is an enigma.”

What we need now in PDP is a man with capacity and vision. What they stop the region from getting under Dr. Goodluck Jonathan, Atiku will provide more,” Orubebe said.

The state chairman of the PDP, Cleopas Moses, told the crowd that come 2019, PDP would take over Aso Rock because “the party in power wants to destroy our nation and we will not allow it.”