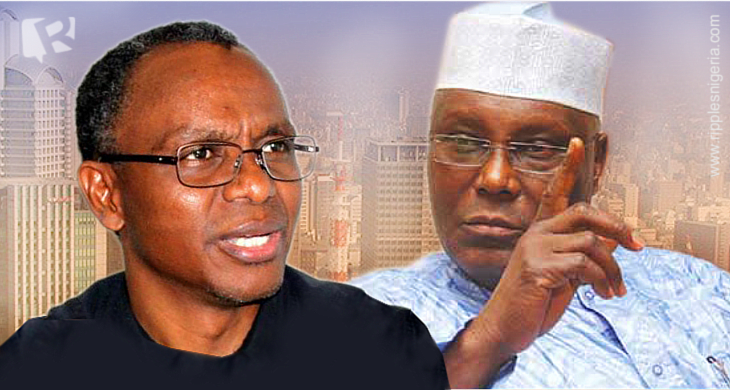 Oladimeji Fabiyi, a coordinator of Turaki Vanguard, an umbrella group for the supporters of former Vice-President Atiku Abubakar, says Nasir el-Rufai, governor of Kaduna state, is “part of Atiku’s contribution to the All Progressives Congress (APC).

He said this in reaction to el-Rufai’s claim that Abubakar did not contribute a dime to the presidential campaign of the APC.

The governor spoke when he featured on a programme on Voice of America (VOA).

But Fabiyi said el-Rufai should not be taken seriously because he “speaks from both sides of the mouth”.

He said apart from the financial contributions of Abubakar, his media team provided the manpower that saw the eventual emergence of President Muhammadu Buhari.

“I have respect for governor of Kaduna state but of recent, it is becoming permanent on him to talk from both sides of the mouth,” Fabiyi told TheCable.

“He is being economical with the truth. He is not a man to be taken very seriously. El-Rufai himself is a product of Atiku, he was Atiku’s contribution to APC.

“Atiku brought him from obscurity to limelight into government that gave him the platform to be director-general minister and now a governor, why did he write book titled ‘Accidental Public Servant’?

“Atiku’s mentorship made him write his book. Atiku is el-Rufai’s benefactor.

“You don’t bite a finger that fed you.

“The campaign that brought in President Muhammadu Buhari has a director-general and I can’t remember Mallam El-Rufai, being the DG of that campaign.

“Apart from financial contribution made by Alhaji Atiku Abubakar in that campaign, there were all other contributions in terms of human resources.

“For instance, the head and deputy head of Buhari media team and some sub-head leaders were all from Atiku’s media office; and they did a very wonderful job.

“Mallam Garba Shehu who is now the SSA on media to Buhari, was the head of the media team, and Paul Ibe, professionals that made that media work, and these are no mean contribution to the success of that campaign.

“For El-Rufai to come out and say Atiku did not contribute anything, to me, he seems like someone who is not grateful and that is not good coming from someone like him.”

He advised the governor to focus on the leadership of his state and provide the people with good governance.

“When the relationship was good, why didn’t he come out to say this? Even President Muhammadu Buhari who was the president-elect at that time acknowledged the immense contribution of all these people that are from Atiku media office,” he said.

“If now because Atiku has left, because of the carelessness of people like Mallam el-Rufai, then it is really unfortunate.

“I will advise Mallam El-Rufai to face the challenges of running his state, and give them good leadership, and stop disparaging the person of former Vice-President Atiku Abubakar.

“He should ask the DG of the campaign to give him the record of those who contributed. He was not part of the team.
When he is not in your good books, he says anything he likes.”

We regret not supporting Jonathan in 2015 – Northern elders lament