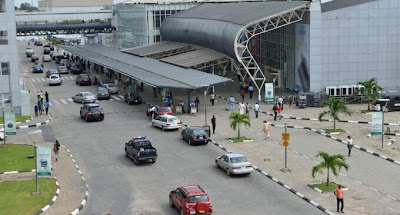 The aviation workers, under the aegis of air transport services senior staff association of Nigeria (ATSSSAN), are protesting the sack of some of their members by Bi-Courtney Aviation Services Limited (BASL).

On Monday, ATSSSAN had issued a seven-day ultimatum to BASL — the operator of MMA2 — to reverse the sacking of over 30 workers or face picketing.

The association also threatened a showdown and demanded payment of its members, their terminal entitlements and reversal of the leave of absence given to them, adding that failure to do so will resort in it using “any known means to fight for members’ rights.”

The union described the sack of its members as witch-hunting and willful intimidation.

It alleged that rather than implementing the conditions of service as agreed with them in 2021, the BASL management had resorted to sacking of its members, including the union’s executives.

Confirming the development to TheCable, Ben Nnabue, president of the national union of air transport employees (NUATE), said BASL did not follow due process in laying off the air transport workers.

“All I can say for now is that we have processes as a union on how workers are being laid off. So, you cannot wake up one morning on your own accord without consulting us and sack 35 of our workers,” he said, in a phone conversation.

Meanwhile, when contacted, the Federal Airport Authority of Nigeria (FAAN) did not respond to requests for more details.

Aviation authorities are also yet to release an official statement on the matter.