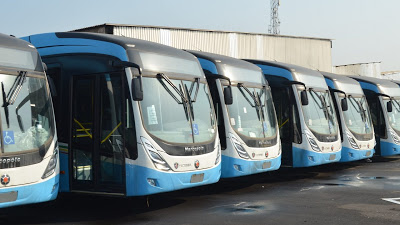 Lagos State government says it will deploy a fleet of 65 buses along major routes from Monday, February 3, to ease the hardship commuters are facing as a result of the ban on the operators of motorcycles and tricycles in some parts of the state.

Gbenga Omotosho, the commissioner for information in the state, said last month that the ban on okada and keke came “after consultations with stakeholders, the State Security Council, in compliance with the extant Transport Sector Reform Law 2018.”

Omotosho said it is the first stage of the state government’s plan to sanitise its “roads and protect Lagosians from the negative effects of these illegal modes of transportation.”

“The Law is very clear. Motorcycles (Okada) and Tricycles (Keke) are banned on all highways, bridges and the listed roads,” Omotosho said.

The restriction has been heavily criticised by commuters as many insisted that the government should have provided sustainable alternatives before the restriction came into effect February 1.

The chief executive officer of Lagos Bus Services Limited Idowu Oguntona, however, said extending the services of the company to these locations will help reduce the vacuum created by the restriction order of Lagos State Government on Okada and Keke operators in some areas.

The buses will operate along Ikeja – Ogba, route; Berger – Ogba; Ikeja – CMS and Oshodi – Ajah corridor. Other routes to be covered include Obalende – Ajah; CMS – Ajah and Inner Marina – Ajah.

The fares for these routes range between N100 and N250.

While maintaining that commuters will enjoy the pleasure and comfort of riding in the new buses along these routes, Oguntona disclosed that more buses will be deployed by the company in no distant time.