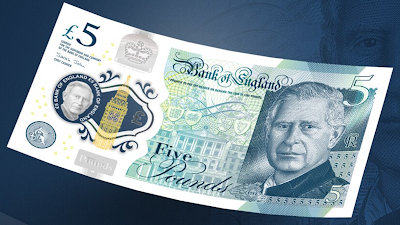 The Bank of England has unveiled its first banknotes featuring King Charles.

The notes will gradually replace those featuring his mother, Queen Elizabeth II, and enter circulation from the middle of 2024, according to Sky News.

The new £5, £10, £20 and £50 polymer banknotes feature a portrait of Charles on the front, as well as a cameo of him in a see-through security window.

Other than that, they are unchanged from the existing designs.

“I am very proud that the bank is releasing the design of our new banknotes, which will carry a portrait of King Charles III,” Bank of England governor, Andrew Bailey, said.

“This is a significant moment, as the King is only the second monarch to feature on our banknotes. People will be able to use these new notes as they start to enter circulation in 2024.”

The Queen first appeared on the Bank of England’s banknotes in 1960.

Notes featuring the Queen will remain legal tender and the bank will only withdraw them when they are worn out, so they could remain in circulation for years.

The Royal Mint has begun issuing the first coins featuring Charles’s profile and they went into general circulation earlier this month.

The monarch’s image appears first on a 50p, with his face in profile turned to the left in contrast to the Queen’s, which faced to the right.

On the reverse is a tribute to Her Majesty with a design that originally appeared on the 1953 Coronation Crown, struck to commemorate her coronation at Westminster Abbey.

It includes the four quarters of the Royal Arms depicted within a shield, and between each shield is an emblem of the home nations: a rose, a thistle, a shamrock and a leek.