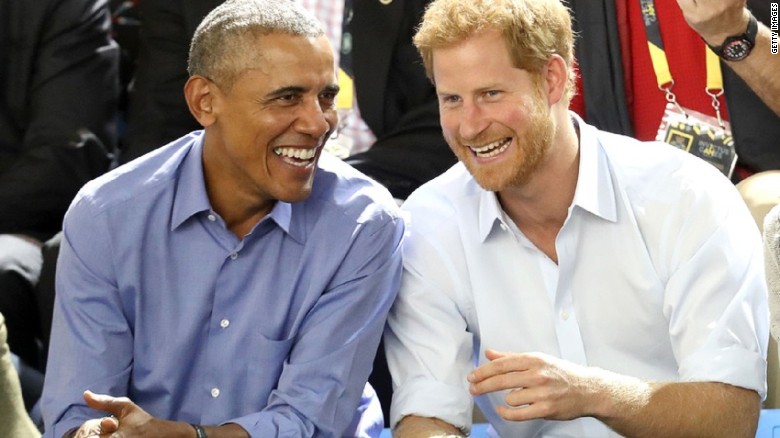 Prince Harry chose Barack Obama to be his flagship interview – but it may not be wise to invite him to his wedding.  The Prince chose to feature the former President on the Today Programme, which he is guest-editing on Wednesday.

The interview highlights the close relationship between Prince Harry and Obama.  The prince is thought to have told aides he wants to invite Mr Obama and his wife Michelle to the wedding on May 19.

But civil servants are said to fear a diplomatic issue if Mr Obama is invited to the upcoming royal nuptials.

Current president Donald Trump is unlikely to get an invite – and there are fears he would not respond well if the Obamas were asked to come.

Relations between Britain and the White House are currently particularly strained.

In November Prime Minister Theresa May criticised Mr Trump after he retweeted three videos made by far-right group Britain First.

She said promoting the messages “was the wrong thing to do” and called Britain First “a hateful organisation. It seeks to spread division and mistrust in our communities.”

The prince’s fiancee Meghan Markle is also thought to be no fan of Mr Trump, having tweeted criticism of him during last year’s US election.

The Obamas helped the Prince, 33 promote the Invictus Games, which were held in Toronto earlier this year.

A senior government source told the Sun: “Harry has made it clear he wants the Obamas at the wedding, so it’s causing a lot of nervousness.

“Trump could react very badly if the Obamas get to a Royal wedding before he has had a chance to meet the Queen.

“Conversations are ongoing about and ministers will eventually have to decide. If the PM lays down the law, Harry will just have to suck it up.”

The wedding is not a state occasion and the Government has only a consultative role in the guest list, which is being drawn up by Buckingham Palace.