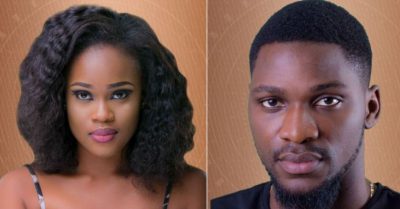 My 3 Daughters Can Stand Shoulder-to-Shoulder With Any Man, says Olori Sekinat Elegushi

Cee-C, a former Big Brother Naija housemate, has disclosed why she was involved in so many fights with co-housemate, Tobi.

In the ‘Double Wahala’ edition of BBNaija 2018 reality show, Tobi and Cee-c were emotionally involved and fought at every instance while in the house.

But, speaking on Tuesday night during ‘DoubleWahalaReloaded’, Cee-c admitted to Ebuka that she fought with Tobi a lot because she was jealous and always wanted him to herself.

She said: “Yea I fought a lot of time with Tobi because I wanted him to myself but he is a socialite and wanted to mix with everyone.

“I was really jealous but the viewers were not easy on us following fights we had.”

Cee-C also revealed why her relationship with Tobi did not work out adding that they were not compatible.

“I did everything I had to do to get us together but we were not meant together,” she added.