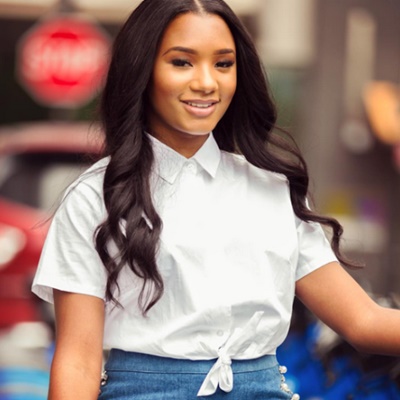 Temi, the daughter of billionaire Femi Otedola unveiled her new cooking show, Don’t Poison Me. The Capital NG stated in its report that the show is billed on the billionaire’s daughter youtube channel.

There is fire in the heart of Temi Otedola. So intense is its flare that her passions crackle in its heat, gifting her life’s enchanted cusp with sparks of brilliance and enduring ambition. The heiress of billionaire magnate, Femi Otedola, recently announced her foray into yet another thrilling terrain; soon after she established herself in the fashion world as a leading blogger and proprietress of JTO Fashion, Temi has unveiled her latest undertaking, a new cooking show, which she calls, “Please, don’t poison me.”

According to The Capital, the show is billed to run on her YouTube channel and the fashion enthusiast disclosed that its first season will premiere soon, with each episode featuring a different guest with whom she would establish interesting banter and cook up a storm.

By her recent initiative, Temi further establishes her independence and desire to attain self-actualization outside the shade of her father’s shadow. Indeed, genius connotes the gene of the Otedola clan. It trickles down the lineage, seeping from one generation to the other, like the pricey but delicate fragrance worn by royalty and coveted by minions living close to the crown.

Genius, like expensive scent, ennobles the Otedola clan, swathing Temi, 19, and her siblings in a flavoured scent. Thus every time she engages in new exploits, she exudes a sense of self that the world appreciates and reacts to.

Few people would forget in a hurry the rapturous tidings that heralded Temi’s brilliant fashion exhibition in London, United Kingdom, few months ago. Her dazzling, avant garde designs, particularly her stunning ensemble established the young, upwardly mobile couture enthusiast as a leader in her class.

On that day, friends, family, business and political associates trooped to London to glower in awe at her designs. The response was splendid and redolent of a fawning gallery’s shrieks of awe at the artistry of a grand orchestra.

There is no gainsaying Temi, heiress of Forte Oil boss and billionaire magnate, evokes the wondrous tribute of ceaseless cheers by her independent spirit and ambitious strides in tandem with the pace of her father’s feats.