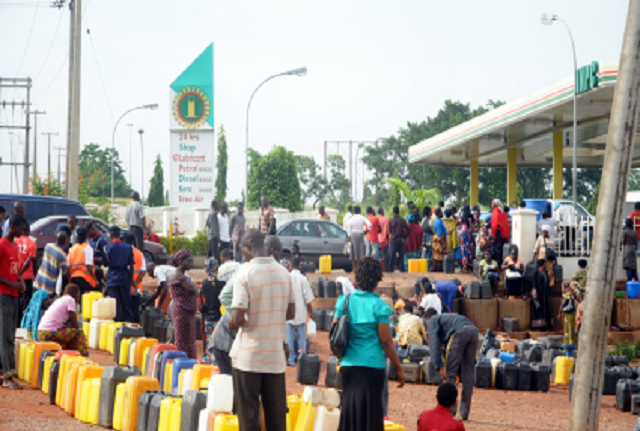 Despite assurances by various government agencies and officials that the current fuel crisis will abate, the situation across the country portends a bleak Christmas, as the scarcity bites harder and thousands are forced to sleep in filling stations to purchase the product.

When the scarcity began, both the Minister of State for Petroleum Resources, Ibe Kachikwu, and the Group Managing Director of the Nigerian National Petroleum Corporation, NNPC, Maikanti Baru, said normalcy was going to be restored in a matter of days.

When the crisis worsened, following the threat by the Independent Petroleum Products Marketers of Nigeria, IPMAN, to embark on a nationwide strike, Mr. Kachikwu, following the marching orders by the Executive Council of the Federation, FEC, said the problem was going to end in a few days.

Subsequent assurances from the NNPC was that enough had been done, by increasing the number of trucks of petroleum products to major cities to take care of the scarcity.

But, days after those assurances, the situation in Lagos, Abuja and most other major cities across the country remain far from normal, as fuel remains in short supply, with attendant high prices.

The resultant impact has been rising transportation fares by almost 100 per cent, as Nigerians prepare for Christmas.

In Abule-egba, Lagos, many stations were closed, while the few that were opened sold petrol at between N200 and N250 per litre.

Along the Lagos-Abeokuta expressway, most filling stations in places like Sango-Otta remain shut

In other parts of Ogun State, majority of the petrol stations were shut and not dispensing products.

The few stations that sold petrol, including the Nigeria National Petroleum‎ Corporation, NNPC, depot were flooded by motorists with queues extending up to three kilometres.

Only a few cars were seen on the roads in Abeokuta, the state capital, while passengers were seen trekking to offices and back home.

The queues in Lagos filling stations have continued to grow, with most motorists abandoning their vehicles at home and commuting with public transport for lack of fuel.

Lagos residents lamented the impact of the fuel crisis on their lives, especially the rising cost of transportation.

A resident, Chinwe Isaac, who spoke with Premium Times, explained how she waited for almost two hours at Obalende bus terminus before getting a bus to Ajah.

“On a normal day, Obalende to Ajah is just N250. But, the fare has now doubled N500. When you question the drivers, the response is that a litre of fuel is sold for N200.”

A corps member, who simply identified herself as Mariam said the scarcity was taking its toll on her.

“Marketers are making a kill from the crisis. Commuters are charged N1,000 from Ojota to Mile 2. I hope the federal government does something urgent about this, especially in this festive period,” Mariam said.

In Ekiti, Ondo and Osun, petrol was sold between N190 and N250 per litre in the filling stations that had the product.