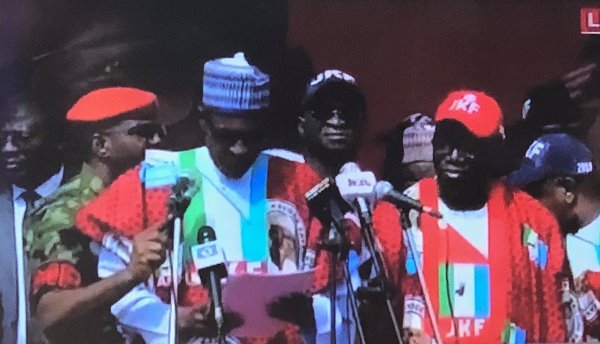 President Muhamadu Buhari on Tuesday asked the electorate in Ekiti not to waste their votes in Saturday’s governorship election on the Peoples’ Democratic Party (PDP).

Rather,  the president urged voters to elect the candidate of the All Progressives Party (APC),  Dr  Kayode Fayemi, given the track record of the ruling APC  administration in the country.

Buhari, who gave the charge in Ado-Ekiti at the grand finale of the mega rally of the party, told the crowd of party faithful and supporters at the Oluyemi Kayode Stadium that there was no better alternative to Fayemi.

He said the people of Ekiti must not be deceived by the “stomach infrastructure’’ programme of the PDP government in the state, describing it as at variance with the norms in a functional democracy.

Buhari said he was in  Ekiti not only to campaign for Fayemi but also to create awareness as well as sensitise the people on the dividends of democracy so far made available to them.

The president said his administration had so far executed 13 projects in the state, with no fewer than 29 contractors handling them.

He said the initiatives, most of which were road construction projects,  had also provided direct and indirect jobs to many residents.

Besides, he said approval had been given by his administration for the construction of a Federal Secretariat in Ado Ekiti to ease the burden of office accommodation faced by federal workers in the state.

He also listed the engagement of many indigenes of the state in the N-Power programme of the Federal Government, granting of bailout funds to the state as well as approval of School-Feeding Programme and Conditional Cash Transfer scheme as some of the achievements of his administration.

The president assured the people of the state of more dividends of democracy if they support Fayemi in the election.

Also addressing the crowd, the National Chairman of the party, Mr Adams Oshiomhole, said Fayemi would redress all the wrongs of the Ayo Fayose administration.

He also gave an assurance that all the salaries and emoluments owed workers by the Fayose administration would be paid.

Speaking in the same vein, the National Leader of the party, Sen. Bola Ahmed Tinubu,  assured residents that the APC was committed to the progress and development of the country.

He accused the PDP of destroying the country’s economy, urging the people to embrace the change agenda of the APC.

” It was the PDP that destroyed the future of Nigeria and those yet unborn. PDP stole all the monies and made life difficult for all the citizens

” It is not easy to rebuild what the PDP has spent long years destroying; for many of them that are now complaining,  where were they when our economy was being bastardised?

” You must not allow anybody to  intimidate you, I urge you to guard  your PVC and use it wisely on Saturday

” It is your turn in Ekiti to get a good government, it is not for you alone but for your children and their future,’’  Tinubu said.

NAN reports that at the rally were 12 APC governors, seven serving ministers and national leaders of the party.

NAN also reports that the high point of the event was the formal defection to the APC by many PDP members including a  serving Senator,  Fatimah Raji-Rasaki, and a member of the House of  Representatives, Oni Olamide.