HomeNewsCorruption: Ex-NNPC MD insists $9.7m seized from him was part of gifts...
News

Corruption: Ex-NNPC MD insists $9.7m seized from him was part of gifts received after his tenure 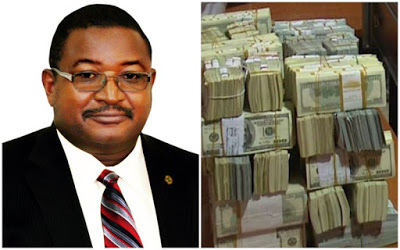 A former group managing director of the Nigerian National Petroleum Corporation (NNPC), Andrew Yakubu, has told a Federal High Court sitting in Abuja that the monies seized from him by the Economic and Financial Crimes Commission (EFCC), were gifts he received after he retired from public service.

The ex-NNPC Chief was subsequently charged to court and arraigned on six counts of money relating with laundering, misappropriation of public fund and fraud.

He was alleged to have, as “group managing director of NNPC, between 2012 and 2014, within the jurisdiction of this court, with intent to avoid lawful transaction, transported to Kaduna $9.7million and €74,000.’’

Yakubu was also accused of failing to disclose the monies to the EFCC in his asset declaration form, a crime which contravened Section 27 (3) of the EFCC Act.

However, giving evidence as the first defence witness, the former GMD said 97 percent to 98 percent of the sum were gifts he received during celebrations which he hosted.

“And it was given to me on the occasions of birthdays, thanksgiving services, weddings of my daughters and other celebrations that I hosted after leaving office.”

He said he kept the money in a safe at home because he was yet to figure out what business to venture into.

“Because the money came unplanned, the plan was to think about the business venture I’ll embark on after retirement,” he said.

“I kept the money in the safe pending when there is a specific business venture I’ll embark on and as soon as that decision is crystalised, the business would be funded through a financial institution.”

Yakubu explained that the remaining two percent of the money was savings he got from estacodes.

“For over 25 years, I had reasons by virtue of my schedule, to travel to many parts of the world. So, I was entitled to estacodes in USD,” Yakubu explained.

“And any savings made during a trip, I came back with whatever I had and saved it. The savings estimated time of start was around 2010 to 2014.”

Currently, Yakubu is standing trial on only two out of the initial six counts preferred against him.

The trial court had struck out two counts while the court of appeal struck out another two.

He was then ordered to come back to the trial court to defend himself on the remaining two counts.

The court adjourned the case till July 22 for cross-examination of Yakubu.