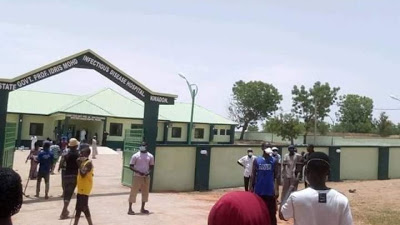 The protesting patients were under quarantine after being tested positive for coronavirus disease.

COVID-19 patients at Kwadon Isolation Centre in Yamaltu Deba local government area of Gombe State stormed the streets on Tuesday in protest over ‘hunger in isolation’.

They were said to have blocked the Gombe/ Biu road, chanting anti-government songs. Some of them reportedly went to unknown locations after the protest while others returned to the centre.

The protesting patients were under quarantine after being tested positive for coronavirus disease.

In the same vein, some COVID-19 patients at the Federal Teaching Hospital in the State also reportedly destroyed equipment in their ward while protesting after they had complained of ill-treatment while in isolation.

A Report monitored stated that after 30 minutes while the protest lasted, some officials in the hospital pacified them, promising that there would be an improvement in their welfare.

Read Covid-19: WHO backs use of traditional medical options

According to TheCable NG, one of the patients was seen and heard in a video saying he had been abandoned since officials of the Nigeria Centre for Disease Control (NCDC) brought him to the hospital three days ago.

He said he had not been given drugs and was left on his own alongside some patients admitted to the hospital over coronavirus.