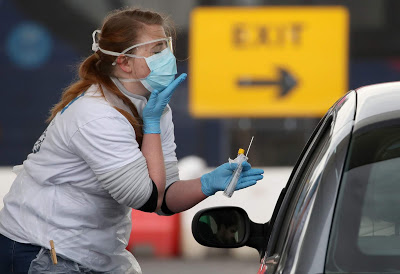 Britain’s death toll from the coronavirus has topped 32,000, according to an updated official count released Tuesday, pushing the country past Italy to become the second-most impacted after the United States.

The new toll, from the Office for National Statistics (ONS) and regional health bodies, has not yet been incorporated into the government’s daily figures, which records the current number of deaths as 29,427.

That is still higher than Italy, which on Tuesday said it has recorded 29,316 virus fatalities to date, but far short of the US where nearly 69,000 have died in the pandemic.

“There are different ways of counting deaths… we now publish data that includes all deaths in all settings and not all countries do that,” he said at the daily Downing Street press conference.

“Can you reliably know that all countries are measuring in the same way? And it also depends on how good, frankly, countries are in gathering their statistics.”

Raab called the lives lost “a massive tragedy” and “something in this country, on this scale, in this way, that we’ve never seen before”.

Tuesday’s updated statistics, showing 32,313 total deaths by around April 24, means Britain has probably had the highest official death numbers in Europe for days.