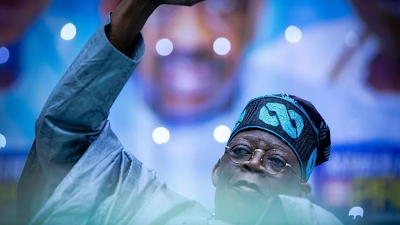 Tinubu’s path to victory became clearer when some aspirants who stood down for the former Lagos State governor urged their delegates to vote for him.

Former Lagos State Governor Asiwaju Bola Tinubu has emerged as the presidential candidate of the ruling All Progressives Congress (APC) for the 2023 general elections following his landslide victory at party’s primary election.

Tinubu, after months of intense horse-trading among various power blocs within the party, polled 1, 271 votes to defeat Amaechi who had 316 votes; Osinbajo took the third position with 235 votes while Ahmad Lawan came fourth with 152 votes.

A total number of 2, 203 (Two thousand, two hundred and three) accredited delegates voted at the election.

Yesterday, proceedings of the primary election got underway towards 8 pm after several backs and forth that included a rowdy accreditation process.

Tinubu’s path to victory became clearer when some aspirants who stood down for the former Lagos State governor urged their delegates to vote for him.

Others were Dimeji Bankole, former speaker of the House of Representatives and Uju Ken Ohanenye, the only female aspirant in the mix.

These aspirants pronounced their respective withdrawal when they were asked to make speeches and in a remarkable turn of events, they all announced that they were stepping down for Tinubu.

Tinubu’s victory at the end of the exercise on Wednesday brings an end to what has been weeks of drama and intrigues that saw Adamu Abdullahi, national chairman of the party who had previously announced to National Working Committee (NWC) members that Ahmad Lawan had been chosen as a consensus candidate.

The announcement followed a series of meetings at the State House, Abuja, the party’s national secretariat and other locations in a plot to foist Lawan.

But it was swiftly swept away, as the declaration of Lawan as consensus candidate was rebuffed by the northern governors who insisted on their earlier position that power must shift to the southern part of the country.