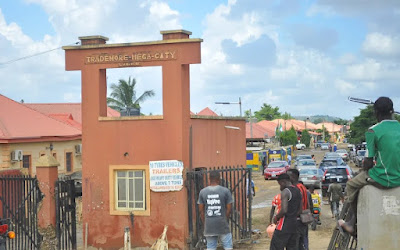 The Department of State Services, DSS allegedly acting in collaboration with American soldiers on Monday staged an operation at Trademore Estate in the Lugbe area of Abuja, nabbing two suspected terrorists.

All entry and exit points into the large estate were sealed while the operation lasted according to The Punch.

The two suspects arrested were said to be siblings and were taken away by the raiding team.

Speaking on the condition of anonymity, a resident disclosed that residents of the estate were practically held hostage during the operation.

He stated, “We were in our houses when our estate was locked up. They did not allow us to go out and they didn’t allow people to come in. Those that came for the operation were DSS and some American soldiers. What I heard was that they were looking for some suspected terrorists. When they finished what they were doing, all we saw was that they drove away with some people from the estate.”

Also, a message on the estate’s WhatsApp platform sighted on Wednesday by one of our correspondents urged residents to be vigilant and ensure they know their neighbours.

It partly read, “It’s no longer news that there was a high-powered sting operation in Phase 3 this afternoon, culminating in a complete shutdown of our estate. A combination of the American Army and our DSS team were responsible.

READ In The News: FG loses against Nnamdi Kanu in court

“We are unable to give full details of the reason(s) behind the operation; however, we can confirm that there was an allegation of terrorist activities. It is therefore desperately incumbent on every resident to remain vigilant, know your neighbours and report any suspicious movement, person or activities to the exco, street reps and/or the police.

‘’We will continue to do our utmost best to keep the estate safe for all of us. Everyone is responsible for security and there should be no iota of abdication of this responsibility.”

When contacted, the Chairman of the Estate, Adewale Adenaike, confirmed the security operation but declined further comment.

He said, “I can confirm to you that DSS personnel and foreign soldiers visited our estate. You can contact them to get the details of what happened. Let me, however, use this medium to urge residents to be calm and vigilant. The rumours of a planned attack on the estate are not true.”

Calls to the DSS spokesperson, Peter Afunanya, to confirm the operation at the Abuja estate in collaboration with the American soldiers were not answered.

While Force spokesperson, Olumuyiwa Adejobi, said, “All diplomatic corps in Nigeria are protected by the police, and operatives also protect the embassies. In fact, before now, we have deployed armoured personnel carriers to protect the US Embassy and others. Interestingly, the embassies are strategically located in the Diplomatic Drive and well-fortified.”