Argentine forward, Sergio Aguero grabbed a hat-trick as Manchester City scored four times inside 25 minutes to humiliate Chelsea 6-0 to move to the top spot in the Premier League ahead of Liverpool again on goal difference on Sunday.

Star player of the evening, Aguero should have gotten more than three as the Argentine missed a glorious early chance and hit the bar in the second-half in a humiliating afternoon for the former champions.

Raheem Sterling also started and ended the scoring and Ilkay Gundogan also netted in the first quarter of the game as City ended what could have been a testing week with a trip to Everton in between the visits of Arsenal and Chelsea with maximum points.

Chelsea on the other hand slip to sixth with the scale of the defeat sure to raise further doubts over Sarri’s future.

A 4-0 defeat to Bournemouth in their last away game was Chelsea’s heaviest league defeat since 1996.

And this was their worst loss in any competition since 1991 after failing to recover from Sterling’s fourth-minute opener.

Eden Hazard went to sleep from Kevin de Bruyne’s quickly taken free-kick and Bernardo Silva had acres of space to cross for the England international to fire home.

Pep Guardiola had described this match as a “final” for his side given that Chelsea had a week to prepare, while City ground out a 2-0 win at Everton on Wednesday.

Aguero missed his first chance to seal a second hat-trick in two games when he headed against the crossbar.

But when Sterling was too quick for Cesar Azpilicueta and chopped down by the Spaniard inside the area, Aguero coolly slotted home from the penalty spot to move level with Liverpool’s Mohamed Salah as the Premier League’s top scorer on 17 for the season. 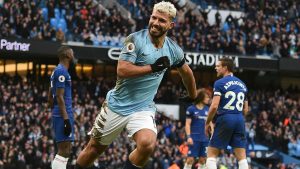 Even after Aguero went off to a standing ovation, City’s strength in depth shone through as Gabriel Jesus, Riyad Mahrez and David Silva came off the bench.

And Silva’s pass opened the visitors up again for the sixth as he picked out Oleksandr Zinchenko who crossed for Sterling to tap home.