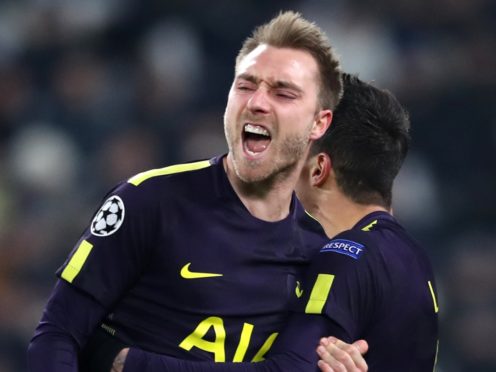 Harry Kane and Christian Eriksen pulled Tottenham back from the brink to hold Juventus 2-2 in Turin, spoiling what had looked set to be a Gonzalo Higuain one-man show in the Champions League last 16, first leg in Turin on Tuesday.

Higuain had put Juventus finalists twice in the past three seasons two goals up within the first nine minutes at the Allianz Stadium.

The Argentine’s lightning strike after just 73 seconds was followed by a second from the spot to leave Mauricio Pochettino’s English side reeling.

But the 30-year-old missed two further chances to hammer home Juventus’s domination in the first half, with his second penalty hitting the crossbar just before the break.

Kane pulled Spurs back into the game after 35 minutes, latching onto a Dele Alli pass to round a helpless Gianluigi Buffon who had advanced off his line, making no mistake alone in front of goal.

It was 24-year-old Kane’s seventh goal this season and puts him level with Steven Gerrard for the most scored by an English player in a single Champions League season.

Dane Eriksen whipped in the second with a 70th-minute free-kick after centre-back Giorgio Chiellini fouled Alli, sending it low past a diving Buffon.

The away goals leave Spurs in a strong position ahead of the return leg on March 7 at Wembley Stadium in London.